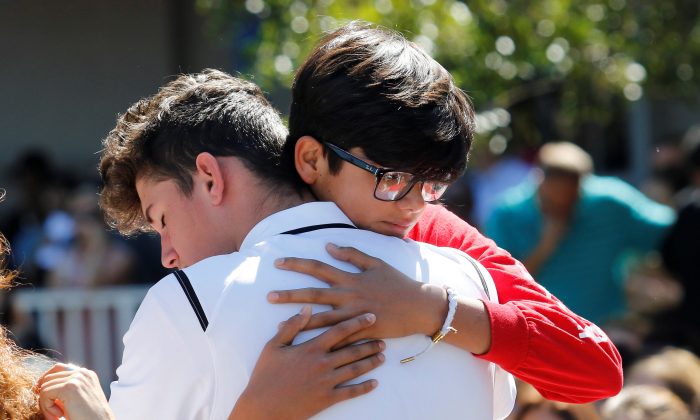 A post by a recently named Teacher of the Year has gone viral.

The post, made by Kelly Guthrie Raley, a teacher in Eustis, Florida, references the recent shooting massacre at Marjory Stoneman High School in Parkland.

Raley was named Teacher of the Year at Eustis Middle School in February.

“Okay, I’ll be the bad guy and say what no one else is brave enough to say, but wants to say. I’ll take all the criticism and attacks from everyone because you know what? I’m a TEACHER. I live this life daily. And I wouldn’t do anything else! But I also know daily I could end up in an active shooter situation,” Raley wrote in the post on Facebook.

Raley continued by stating what she feels like are the reasons mass school shootings are happening.

“…lack of moral values, and yes, I’ll say it—violent video games that take away all sensitivity to ANY compassion for others’ lives, as well as reality TV that makes it commonplace for people to constantly scream up in each others’ faces and not value any other person but themselves, we will have a gun problem in school. Our kids don’t understand the permanency of death anymore!!!”

Raley revealed that she grew up around guns but her parents were quite strict and she was “terrified of doing something bad at school.”

Raley said that parents need to do better.

“My parents invaded my life. They knew where I was ALL the time. They made me have a curfew. They made me wake them up when I got home. They made me respect their rules. They had full control of their house, and at any time could and would go through every inch of my bedroom, backpack, pockets, anything! Parents: it’s time to STEP UP! Be the parent that actually gives a crap! Be the annoying mom that pries and knows what your kid is doing. STOP being their friend. They have enough ‘friends’ at school. Be their parent,” she said.

She said the post wasn’t about gun control, but about “loving the crap out of people and wanting the best for them.”

Nikolas Cruz, identified as the culprit in the most recent school shooting that killed 17 and wounded 14 others, apparently grew up without a father and recently lost his mother.

Kentucky Governor Matt Bevin also implicated violent video games as part of a “culture of death that is being celebrated” and said that it leads to incidents such as the mass shooting on Wednesday.

“There are video games that, yes, are listed for mature audiences, but kids play them and everybody knows it, and there’s nothing to prevent the child from playing them,” Bevin said in an interview on WHAS.

“They celebrate the slaughtering of people. There are games that literally replicate and give people the ability to score points for doing the very same thing that these students are doing inside of schools, where you get extra points for finishing someone off who’s lying there begging for their life.”