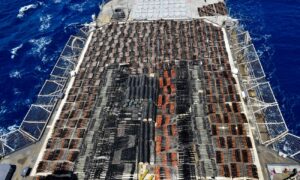 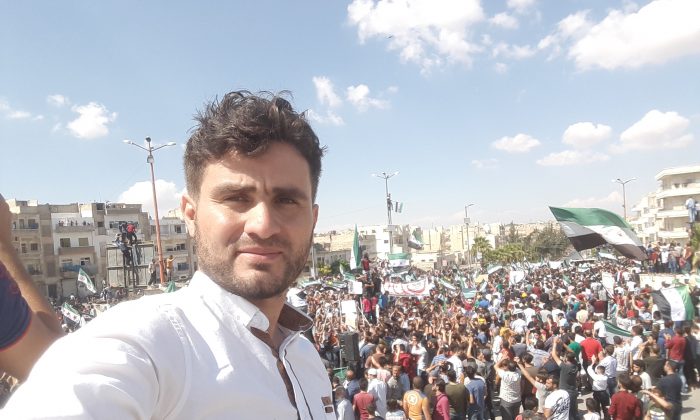 ‘If there will be no education, all the youngsters will become fighters,’ says Abdulkafi Alhamdo
By Maya Mizrahi
biggersmaller
Print

TEL AVIV, Israel—A few years ago, Abdulkafi Alhamdo stood in front of his class of 9- to 10-year-old children in Aleppo, which was under attack by Syria’s Assad regime at the time. It was a makeshift classroom, the living room of an abandoned apartment, and there was a smell of destruction in the air.

Soon after the class started there was a knock on the door and one of his pupils, Amran, stood there. After Alhamdo asked him why he was late, he said in a choked voice: “My father and my sister were killed yesterday in the attack. I came to tell you.”

After protests erupted in Syria in the spring of 2011, Alhamdo could have fled the country, as many of his friends and neighbors did. But he stayed for the sake of children like Amran who were going to need all the kindness and stability they could get as the protests escalated into armed rebellion following a brutal crackdown by Bashar al-Assad’s government.

“I love my pupils very much. We have a very close relationship. I always ask them how they are doing and if they are safe. I stayed in Syria for them,” he said by phone from Idlib in northwestern Syria.

“After seven years of war and destruction, we need to do something good. We have to educate the next generation. Believe me, if there will be no education, all the youngsters will become fighters, they will probably join extremist organizations. … People will have a horrible future. That’s why we are here.”

In those seven years, many areas of the country have seen fighting and deadly airstrikes, and government forces—backed by Iran and Russia—have made gradual but significant advances.

Of late, Assad has been threatening an all-out assault on the rebel-held city of Idlib, where Alhamdo now lives with his wife and two children and teaches English literature at a university. On Nov. 24, eight people were killed in south Idlib province after airstrikes targeting a school, Alhamdo said on his Facebook page.

Because of the trauma and turmoil the conflict brings with it, Alhamdo said he and his fellow teachers have always endeavored to show the utmost compassion and caring for the children. We asked him to elaborate on that.

The Epoch Times: How do you bolster the children’s well-being in such circumstances?

Abdulkafi Alhamdo: When Aleppo was in the front line, we teachers understood that we had to be very careful with the children. For example, when a child misbehaves in class you can’t say to him ‘bring your father’ because it may be that his father is dead. Even a simple question like ‘why are you late?’ isn’t good.

In Aleppo I was teaching subjects including English and math, but first I was thinking about their soul. I would go home thinking: ‘What shall I do with this child?’ There is always time to teach, but first of all I had to take care of the people, think about food. I used to tell them jokes and helped them forget the bad things, only then would I start to teach. We tried to build a curriculum based on character development rather than based on knowledge. We used to ask them if they were happy.

The children didn’t feel hate or jealousy, they loved each other. Every time when something bad happened, when someone lost his father or mother, we all came to this child’s house to give condolences. I would tell this child that he will grow up to be as good as his mother was, good like his father was. I would tell him that they would want him to grow to be good in the future. We tried to stay with the child until he could return to class.”

The Epoch Times: How did you keep the children safe?

Mr. Alhamdo: When we read that 41 children had died in one deadly bombing in Homs, we decided to stop teaching in regular schools. We decided to form small schools and we taught in private homes, in apartments and in shelters. In each small school, we had 100 pupils. If there were three empty apartments close to each other, it became a school. When they weren’t in shelters, we taught on the third floor. The lower floors are more dangerous. Most schools were like this.”

The Epoch Times: Did you talk with them about death and about the hard times they’re going through?

Mr. Alhamdo: Most of the time I spoke with them about how life is much better than death. We don’t like death and cherish life. I didn’t want them to think that death lies at the end of our situation. I emphasized: ‘Live your day, forget what could happen tomorrow. Live your day as if you will live forever.’ Sometimes I would refer to the ideas written in their books and compare to their lives in a funny way. When I teach, I always try to elevate their spirit and get them out of their sadness and their worries.

The Epoch Times: How about the parents. Did they want to send their kids to school?

Mr. Alhamdo: The parents didn’t want them to go. There was a time in which seven of my pupils and four colleagues were killed when we were at school together. A pilot directed [the bombs] straight at our school.

Imagine those 8-, 9-, 10-year-old children leaving their families and homes to attend school.

That is why I call my pupils heroes. They are noble heroes. … They have bombs falling on them and they still come to school. Once, I saw two of my pupils, a 6-year-old and his sister, 11 years old, walking to school and a bomb suddenly fell near them. Fortunately, they weren’t hurt. They ran home to find shelter. You might expect them to stay home, but three minutes later they called me and said, ‘Let’s go to school together.’

[In Idlib once,] they bombed us in the middle of an exam. Every time a bomb was supposed to fall, I told the students to breathe deeply, to count to three, and it was over. We teachers treated the situation like it was a joke.

The Epoch Times: In 2016, when you were evacuated to Idlib from Aleppo, you left with your pupils. Do you still see them?

Mr. Alhamdo: We said goodbye and each of them went his own way. At the moment of separation, I told them that they are the future of our country, that they will be able to become teachers themselves and take care of their students. I saw some of them here. They are 15 and 16 years old now.

The Epoch Times: Assad has threatened to launch an offensive in Idlib. If that happens, what will you do?

Mr. Alhamdo: If the Syrian regime will attack, I expect the worst-case scenario, a disaster, maybe genocide. Until now I used to look forward to the future. If something that bad will happen I will lose my future, lose my past, lose everything. I will start thinking of death. I will not be the only one—everyone will think this way. The day this will happen, people will oppose it until death. We will never agree to live under the Syrian regime.

This is the reason why we focus on the present moment. Even if I will go to the university knowing that the destruction will start tomorrow, I will go anyway. I will go tomorrow without thinking of the day after tomorrow. If something bad will happen, it will occur against our will. But at least we will know that we had tried.