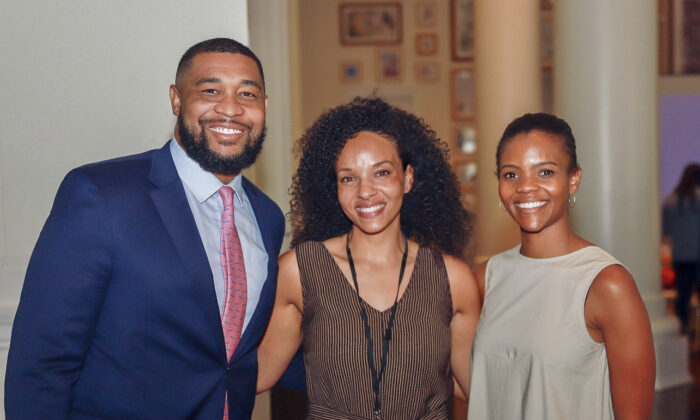 Teacher Creates Educational Guide to Counter CRT in the Classroom

A teacher who quit her job in California and moved to Florida over what she saw as the political indoctrination of students and staff has helped to produce a guide to help educators spot critical race theory (CRT) in the classroom.

The Blexit Foundation rolled out the new guide, developed by Kali Fontanilla, to its 35 chapters across the United States on Oct. 4.

Liberal cities, especially those with large minority populations, are aggressively advocating for CRT, which is based on Marxist themes, to be taught in American classrooms, Wilson said.

“This is an attack on all of America,” he said. “They’re pushing it extremely hard right now, so we felt it was something that we had to respond to right away,” by offering an alternative, he said.

A graphic promoting the guide shows the foundation’s co-founder, Candace Owens, surrounded by a crowd of supporters, carrying the banner “Blexit’s Stand Against CRT.” It states: “As part of our ongoing education initiative, the Blexit Foundation has launched a new tool kit outlining how parents and teachers can identify and fight back against the creeping influence of CRT in America’s classrooms.”

Blexit’s mission is to lead a “black exit” from the decades-long grip of the Democratic Party.

The digital guide will be available in print this month, Wilson said.

Fontanilla, who is known for her strong background in teaching, has done “a fantastic job” on the guide, he said.

Though others reached out to help write the guide, Blexit ultimately chose Fontanilla “because of our experience with her and the work that she’s done in her community,” Wilson said. “She is a social media influencer now and has made quite a few videos also expressing her passion and belief that CRT is wrong for this country.”

Fontanilla’s guide is designed for teachers across the nation to help students see alternative views to the CRT’s narrow “hyper race-focused lens,” she said. “It’s not just in ethnic studies in California.

“It’s a guide for parents and teachers on how to spot it, what to do if they’re forced to teach it, what it is because a lot of people don’t know what critical race theory is, and all the key terms that are in it,” she said.

“In the public schools right now, it’s almost a given, especially in California or in any blue state, that your curriculum is going to be left-leaning. That is just the default,” she said.

For example, health classes usually have a pro-abortion message and history classes tend to paint white people in a bad light, she said.

The Blexit guide includes lessons to counter CRT, including equity versus equality and learning about the Quakers and their fight to abolish slavery. It shows teachers how to instruct students in a way that helps them to critically think about CRT “rather than just brainwashing them into going along with these narratives that America is super racist, and every institution is either oppressing them or benefiting their oppressor,” Fontanilla said.

While the California School Boards Association has claimed the words “critical race theory” appear only once in the curriculum, references to CRT ideology are prevalent throughout the state’s Ethnic Studies Model Curriculum.

“It’s just silly to me that they deny it, because it’s just everywhere right now,” Fontanilla said.

“This is why it’s important to be able to spot the concept of CRT being inserted in lessons for our students that may not explicitly be labeled as CRT,” she said.

Terms such as privilege, intersectionality, hegemony, dominant ideologies, and decolonization, even diversity, equity, and inclusion, as well as the four Is of oppression (ideological, institutional, interpersonal, and internal) are “just CRT rebranded,” she said.

Fontanilla is an advocate for school choice and has encouraged everyone to speak out at school board meetings.

“School board meetings are public forums in which all members of the community should be welcome to comment even if they don’t have a child in the school. Do not be afraid to speak up. We need every voice in this fight,” she writes in the guide.

Fontanilla taught for about 15 years in California and told The Epoch Times in June she decided to leave her teaching position at Rancho San Juan High School in Salinas, California, after being threatened and bullied on social media for opposing CRT components in the ethnic studies program and denouncing the group Black Lives Matter (BLM).

Since then, Salinas Union High School District (SUHSD) has resisted reading aloud a letter she wrote criticizing school board president Phillip Tabera, who attacked opponents of CRT as “anti people of color” on social media following a June 22 board meeting.

Tabera hasn’t responded to multiple inquiries since the incident, and the school board has failed to heed the concerns of parents who spoke out against the SUHSD’s ethnic studies curriculum, seen by some as anti-American and anti-Christian.

“I am disgusted and insulted that he would say such derogatory words about those that were brave enough to speak up about this indoctrination happening in the classroom,” Fontanilla wrote. “Some of those that spoke up were people of color, including myself. To be told that we are ‘anti people of color’ because we are against the district forcing all of our students to receive lessons that are racist and divisive is disgraceful.”

Even as California’s political leaders are known for trying “their hardest to be the most progressive state in the country,” Wilson said no matter what their agenda is called, he believes it’s the same old story of victimhood.

“They’re trying to change America’s history. They want the story to be told only from certain points of view, and they want us always thinking about the past. They want minorities, such as myself and others, to feel like victims,” he said.

“I’m actually a real Blexit story. I was a hardcore Democrat for a very long time,” Wilson said.

Like others who joined the organization, he says he got tired of blaming others and decided to exit the party. Wilson now believes in Blexit’s message that change begins on the inside, not looking outside for someone or something to blame.

But CRT teaches the “total opposite,” he said. “It’s pointing your finger at everyone else and it’s being a victim. …Who did you wrong? Who can you blame? That’s not how we operate.”

Those who claim CRT is uplifting and sheds light on the truth are mistaken, Wilson suggested.

“It’s not true. It’s a political stance that’s now being pushed into our schools,” he said. “I’m black, and I don’t feel oppressed. I don’t feel like there is systemic racism in this country. I feel like the day that I decided to change my life, my life changed.”

While perhaps well-intentioned, constantly telling black teachers they are appreciated, special, or that black educators matter—as Fontanilla was told at her California teaching job—singles them out for how they look rather than their accomplishments, he said.

“What about the kids who are growing up, who really don’t see race, like black and white girls who are playing together who are having a great time who don’t see anything negative?” he asked. “But now, they’re in school, and now they’re being forced to look at each other a little bit differently because one side or family has oppressed the other?

If CRT proponents really wanted everyone to understand history, “they would understand that white people weren’t the only ones who owned slaves, not to mention that it was white people who helped free the slaves,” Wilson said.