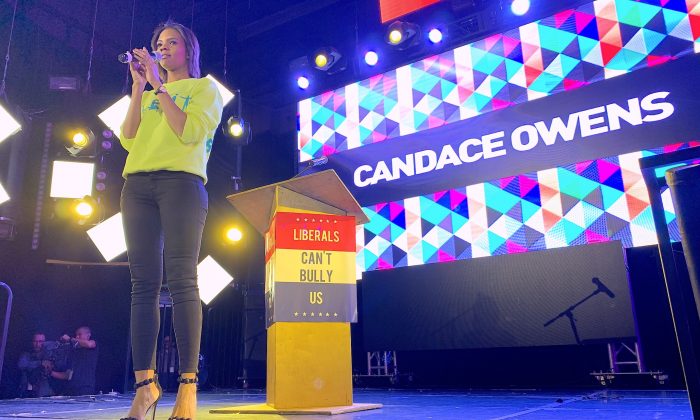 LOS ANGELES—The first Blexit rally—celebrating the exit of black Americans from the Democratic Party—was held at the Globe Theatre in downtown Los Angeles on Jan. 20.

The free event was hosted by Turning Point USA’s Candace Owens, who announced the movement in October at the Black Leadership Summit, a three-day event geared toward young black conservatives, ahead of the Nov. 6 midterm elections.

The Los Angeles venue welcomed a full house of people of all colors, who showed their support for black and Latino Americans for leaving what they called the “Democratic plantation.”

“What changed my mind is being disillusioned with the Democratic Party,” said Joy Villa, an outspoken conservative black and Latina singer/songwriter, who attended the event. “I thought, ‘Oh yeah, I’m going to be a part of this system that is supposed to help me and my people.’ And I realized, it does not help anybody.”

Villa said President Donald Trump has helped increase her awareness of issues she always knew were most important to her, and his willingness to challenge political correctness gave her courage to speak out. She also said there are a lot of minorities who tend to lean conservative, but they may be afraid to admit it.

PACKED HOUSE of Black and Latino patriots in Los Angeles WHO WANT THE WALL!

The silent majority is WITH @realDonaldTrump !!

Why won’t the media report this? They don’t want people to know the truth!@RealCandaceO leading a revolution!#BLEXIT

Owens said the event was like a “dream come true.”

“Tonight is really about having those conversations that the media refuses to have with us about what’s actually going on in our communities,” she said.

Owens said that for her, Blexit began when she was only 5 years old. She grew up in low-income housing, and once when she visited a friend’s house, she couldn’t believe how big and nice it was.

She said there was one main person who first helped her transform her way of thinking, and that was Larry Elder, a black radio host, writer, and attorney.

Elder gave the first speech of the evening at the rally. He said he was called a “boot-licking Uncle Tom” for his conservatism the first time he spoke on the radio. However, that hasn’t changed his beliefs.

“Take a magic wand and wave it over America and remove every smidgen of racism from the hearts of white Americans,” he said. “We still have a 50 percent inner-city dropout rate. We still have 73 percent of kids born outside of wedlock. We still have 25 percent of young black men with criminal records, in jail, on probation, or on parole. What does that have to do with racism? It has everything to do with the breakdown of the family.”

“In fact,” he added, as the audience gasped, “during slavery, a slave was more likely to be raised under a roof with his biological mother and biological father than [a black child] today.”

I may or may not have made @TheOfficerTatum drive 5 hours with #BLEXIT t-shirts.

Tatum, a former Tucson, Arizona, police officer who once made a Facebook video that got more than 70 million views, spoke about police relations with the black community. He said the number of unarmed black people killed by white police officers is much smaller than it might seem according to the media, and that just because someone is unarmed doesn’t automatically mean they’re not a potential threat.

“It’s more of a chance that you’ll get struck by lightning than for you to somehow get killed by a police officer as an unarmed Black person or Latino person,” he said.

In addition, Tatum said anti-police rhetoric can be dangerous to the entire community.

“The lies that they’re perpetuating is causing people to be more aggressive,” he said. “When you think that there’s people in your community that want to kill you, that want to harm you, [and] take your freedom away, it’s going to make you mad.”

Many other attendees at the event declined to be interviewed, but Villa said it was enough that they decided to come. She encouraged others to take a closer look at the Blexit movement.

Other Blexit rallies are now being planned for Washington, Chicago, and Dallas, according to the official website.