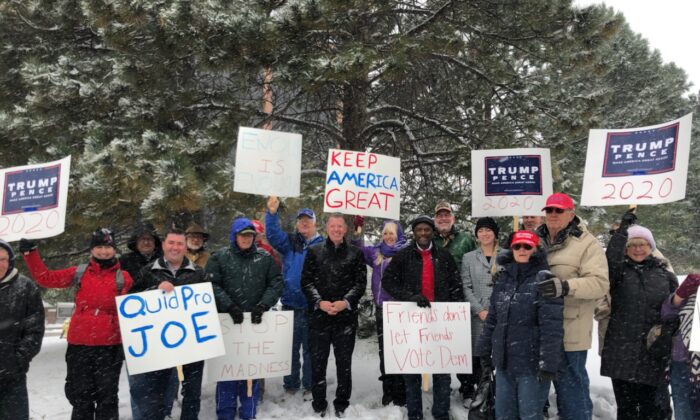 Tea Party Patriots launched a nationwide agitation campaign Thursday, Oct. 10, visiting district congressional offices around the country to state their objection to the impeachment inquiry against President Donald Trump over his phone call with the president of Ukraine. President Trump has released the transcript of his phone call, and Democrats have not held a formal vote to begin impeachment.

“Today activists showed up to visit their Representative to say they want the impeachment inquiry and witch hunt against the President to stop,” Jenny Beth Martin, Tea Party Patriots founder, told The Epoch Times.

“We had people visiting from coast to coast at over 200 local congressional offices. Some even weathered the early snow in Colorado and waved signs for President Trump to show support publicly. Over the coming weeks as the radical left continues their efforts to steal the 2016 election from us, we will continue to have calls to action at TrumpDefenseTeam.com,” Martin said.

Randy Corporon, a Tea Party leader in Colorado, rallied his activist troops against the backdrop of an intense winter storm. His protesters visited the office of sixth district Democrat Rep. Jason Crow.

“They did not let any of us in except for one woman who drove about 2 hours in the storm with her young two-and-a-half, three-year-old daughter to attend the event and speak to the congressman. She said she had to tell the staff that she drove two hours through the snow, and she expects to be able to go in and leave her message for her congressman,” Corporon told The Epoch Times.

The Colorado GOP worked in unison with the Tea Party on the protest, and local candidates for office—including candidates running for Crow’s seat—addressed the crowd of protesters.

“The property manager for the building came screeching in in his car. He got out, said who’s in charge here? He threw us out of the property and threw us out to a public sidewalk. He was not nice about it,” Corporon said.

“I think it is probably a benefit to the re-election of President Trump,” Corporon said, referring to the impeachment effort. “I hate what it is putting the country through. I think he’s absolutely right in ignoring the House of Representatives until they bring up articles of impeachment, which gives the presidency the right to defend itself. I love how he is handling this,” Corporon said.

Atlanta Tea Party leader Debbie Dooley recalled the protest she led on Oct. 2 of Rep. Lucy McBath’s office. The doors were locked on a group of 15 of her constituents, and only three were eventually allowed in to talk the congresswoman’s staff.

“I got a permit for the sidewalk because I knew it would be a handful,” Dooley said. “We stayed out of the roads and we still had someone call the police and say we were blocking the roads. We weren’t. They must not have liked the response we were getting from cars driving by. The police came and told us about the call and said he observed us and we weren’t doing anything wrong.”