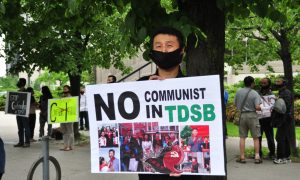 TDSB Committee to Vote on Terminating Partnership With Confucius Institutes
0 People demonstrate against the Toronto School Board's partnership with the Beijing-controlled Confucius Institute outside the TDSB on Oct. 1, 2014. A committee has voted in favour terminating the TDSB's Confucius Institute program. The issue will now go before the entire board for a vote at the end of the month. (Allen Zhou/Epoch Times)
Canada

A Toronto District School Board (TDSB) committee has voted in favour of permanently removing the controversial Confucius Institute program from Toronto schools.

The vote took place on Oct. 1, and the issue will now go before the entire board for a vote during a general meeting at the end of the month.

Six out of the seven trustees voting on the issue, including TDSB chair Mari Rutka, voted to terminate the partnership.

“I am concerned about the nature of Confucius Institute and its political restriction,” Rutka told the committee.

Ward 3 Trustee Pamela Gough, who also voted to terminate the partnership, said there is clear evidence that Confucius Institutes (CIs) are directly controlled by the Chinese Communist Party.

“We do value languages, we do value culture, but we do not value the values of the Communist Party of China … I want nothing to do with the CI,” Gough said.

Rutka told Epoch Times in a previous interview that because of the significance of concerns raised about the CIs, trustees didn’t want to wait for a staff report on the Beijing-run program any longer and wanted to put the issue to rest.

The partnership was spearheaded by former TDSB chair Chris Bolton while the rest of the board was kept in the dark about the details of the agreement. Bolton resigned from his position in June a few months before the end of his term amidst concerns raised by parents and many of the trustees about the partnership.

CIs, which are cited by supporters as programs meant to promote Chinese language and culture, have been said by intelligence agencies to be organizations used by the Chinese regime to extend its soft power and even used for espionage.

“Confucius Institutes are actually used by the Chinese government and the Chinese intelligence services to promote first some of China’s policies and views on certain issues, and limit the topics and conversations and discussions that their teachers are allowed to teach,” Michel Juneau-Katsuya, former Asia Pacific head at Canada’s intelligence agency CSIS, who also addressed the committee on Wednesday, told Epoch Times.

With reporting by Allen Zhou.