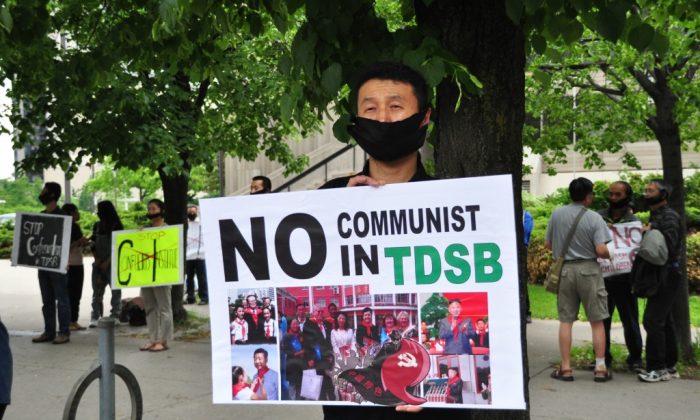 TDSB Committee to Vote on Terminating Partnership With Confucius Institutes

The Toronto District School Board (TDSB) is once again voting on its Confucius Institute, this time to decide whether to permanently sever its partnership with the controversial program run by the Chinese regime.

The motion to abandon ties with the Confucius Institute (CI) will be tabled before a TDSB committee on Oct. 1, and if it receives a majority vote, it will again be put up for a decisive vote before the entire board during a general meeting at the end of the month.

The partnership was originally championed by former TDSB chair Chris Bolton while the rest of the board was kept in the dark about the details of the agreement. Bolton resigned last June a few months before the end of his term amidst concerns raised by parents and many of the trustees about the partnership.

The TDSB voted to delay the implementation of its CI in June, and asked staff to prepare a report about the program and what the partnership entails.

Current TDSB chair Mari Rutka says the staff is on track to release the report in November, but due to the many concerns raised, trustees no longer want to delay making a decision on terminating the program.

Branded as promoting Chinese language and culture, CIs have been cited by intelligence agencies as organizations used by the Chinese regime to extend its soft power.

Ward 7 trustee Irene Atkinson, who will table a motion before the committee on Wednesday to cut ties with the CI, says she doesn’t want children in Toronto being taught and indoctrinated by Beijing.

“This country is a democratic country. We have freedom of speech, we have freedom of assembly, we have elections that mean something, and that is not true of China,” Atkinson says, referring to an article posted on a Chinese website which cites former Chinese Communist Party (CCP) head Hu Jintao saying CIs are the Party’s focus to increase its influence.

“It is not that we suddenly begin to like Confucius. … Through many years of effort, we have now found the way to cultivate and prepare supporters for our Party. … This is our army for future cadets and it is our most important soft power,” Hu is quoted as saying.

During the Cultural Revolution, Mao Zedong launched an anti-Confucius campaign to destroy the so-called “feudal thinking” associated with the teachings of Confucius, the namesake of the Confucius Institutes that the CCP promotes so widely today as it recognizes the appeal the ancient sage has abroad.

Most recently, the University of Chicago suspended negotiations to renew an agreement with its CI. More than 100 professors at the university had signed a petition to remove the CI from the university last spring.

CIs also drew heavy criticism when it was revealed that Xu Lin, the director-general of the institutes, ordered academic materials to be stolen and censored at a conference organized by the European Association for Chinese Studies.

Earlier this year, the American Association of University Professors (AAUP), which represents tens of thousands of academics in the United States, urged universities not to partner with CIs, warning that the institutes serve as an arm of the Chinese state. AAUP’s published position on CIs follows on the heels of a similar statement from their Canadian counterpart, the Canadian Association of University Teachers (CAUT), which called on academic institutions in Canada to cut ties with the institutes.

“Confucius Institutes are actually used by the Chinese government and the Chinese intelligence services to promote first some of China’s policies and views on certain issues, and limit the topics and conversations and discussions that their teachers are allowed to teach,” Juneau-Katsuya says.

But what is of even greater concern is that counterintelligence agencies are convinced that China uses CIs for spying activities.

“For the Chinese intelligence services it’s a great opportunity to identify some people that could be of interest and eventually try to obtain information from them or use them as agents of influence to be able to facilitate China’s acquisition of technology, acquisition of information,” he says.