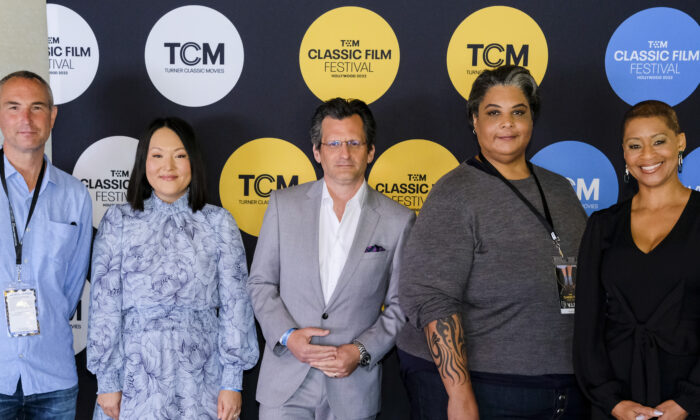 Every year, Turner Classic Movies (TCM), the company which has brought old movies to the masses through their television channel since 1994, offers cinephiles a chance to enjoy classic films together in downtown Hollywood. The TCM channel plays more than just movies, so I wasn’t surprised that the April 2022 Turner Classic Movies Film Festival (TCMFF) included shorts, special features, book signings, interviews, and conversations as well as dozens of films. When I covered the festival, I tried to attend a few special presentations in addition to the fourteen films I screened. One of the only special features I was able to squeeze in was a panel discussion called “Reframed: Exploring the Complex Topic of Art vs. The Artist.”

This was the only panel discussion at this year’s festival. It took place in the Hollywood Roosevelt Hotel’s historic Blossom Ballroom, which was dubbed Club TCM during the festival. Newer TCM host Jacqueline Stewart acted as interviewer, and the panelists included TCM programmer Charles Tavish, famous TCM host Ben Mankiewicz, and two guests, Roxane Gay and Nancy Wang Yuen. Gay is a writer, professor, editor, and a social commentator, and Yuen is a socialist, pop culture expert, and author. At the opening event, TCM hosts talked about the last festival’s “Reframed” panel discussion, which was on the racial issues in “Gone with the Wind.” They described it as a stimulating, exciting discussion, but I’m afraid this year’s “Reframed” didn’t live up to that description.

I wasn’t the only one who found “Reframed” lacking in something. I heard another guest nearby whisper, “This is really boring,” and I noticed that a lot of people left before the end, especially during the final Q and A. While I think calling it boring was a bit harsh, I must agree that it was far from the stimulating debate or at least back-and-forth discussion I was anticipating. A discussion has nowhere to go when everyone involved has the same beliefs. It’s only when there are different opinions that an interesting debate or even an intelligent discussion can develop.

I was pleased that, besides this one event, I didn’t perceive a political agenda in the choice of films or the introductions at the TCMFF. “Reframed: Exploring the Complex Topic of Art vs. the Artist” was the only time I felt like the company was biased one way or the other. Other than that, the weekend was dedicated to simply celebrating the art of film and enjoying being back together after two years of online events.

From the title and description of this program on the TCMFF website, I wasn’t sure beforehand what its main theme would be. I later realized that it was called “Art vs. The Artist” because the topic was whether we can or should enjoy the art of individuals whose backgrounds, lifestyles, or behavior is questionable. Not every person or issue discussed was politically or socially controversial. I think most people can agree that Bill Cosby and Harvey Weinstein have committed proven crimes. However, measuring people who lived and worked during the mid-20th century by the “woke” standards of 2022 seemed decidedly liberal, with no opposing voice to defend the deceased accused.

To me, the most positive conclusion from this discussion was that TCM does not believe that some movies should be banned because of the people involved in making them, either on or behind the camera. Instead of removing certain films or artists from programming, they generally support inserting a warning, explanatory introduction, or some other caveat. The panelists agreed that no film should be off-limits, since even problematic movies can be used for learning, growth, and as fodder for constructive conversations. I appreciate their being openminded enough to still play old movies which have become controversial in recent years, but the statement that they would not include actors now deemed racist as Stars of the Month struck me as dangerously similar to cancel culture.

The main Old Hollywood celebrities who were denounced during this panel were John Wayne and Charles Coburn. It’s not surprising that these two men’s legacies have come under fire in recent years, since both were outspoken conservatives, Republicans, and anti-communists.

Born in Georgia in 1877, Coburn was an old-fashioned Southerner. He was a member of the segregationist, white supremacist organization the White Citizens’ Council. Formed in response to the Supreme Court’s 1954 ruling against school segregation in “Brown vs. the Board of Education,” this Southern activist group is often called the more social, public version of the Ku Klux Klan. Its goal of maintaining segregation and white supremacy in the United States, particularly the South, was not unlike the KKK’s agenda. Ben Mankiewicz said that Charles Coburn seems like a lovable grandfather onscreen, so it’s surprising that he was such a bad person offscreen. I have to disagree with Mr. Mankiewicz on two points. Firstly, I don’t think it’s fair to call somebody one doesn’t personally know a bad person based on his political or personal beliefs. Secondly, I don’t find it hard to believe that Coburn was less than cuddly offscreen, since he usually played, at best, gruff characters with good hearts and, at worst, downright evil men. I also wasn’t surprised when co-star Piper Laurie said he liked pinching women, since he convincingly plays a lecherous character in several films, including “Gentlemen Prefer Blondes” (1953). Nevertheless, I don’t think his talent as an actor or his whole reputation as a human being should be written off because of these character flaws.

Charles Tavish said that TCM doesn’t want to lose John Wayne’s art, even though he made a racist comment. The whole case about Wayne’s racism and homophobia is based on a 1971 Playboy Magazine interview. They didn’t discuss its details during the panel, so I had to refresh my memory by reading the interview afterward. In his “racist” comments, he basically stated that black people should not be given positions of authority for which they are not trained and qualified merely because of their ethnicity, denouncing the tokenism creeping into American society in the early 1970s. Unlike Coburn, he didn’t support unconditional white supremacy and segregation. He said, “I believe in white supremacy until the blacks are educated to a point of responsibility.”

After this interview resurfaced in 2019, taken completely out of context, there were demands for John Wayne tributes to be revoked, much like the toppling of Confederate statues. However, the rest of the Duke’s life speaks of traditional Americanism, not bigotry. He was the highest-profile Republican in Hollywood, an out-spoken opponent of communism, and a founder of the Motion Picture Alliance for the Preservation of American Ideals in 1944, becoming its president in 1949. Regarding his so-called homophobia, he was an unapologetically traditional man, calling a film’s romance between two men “perverted.” Some might say that it was un-American of him to support and aid the blacklisting of fellow actors for their communist political beliefs, yet he was so patriotic that he stated after John F. Kennedy’s presidential win: “I didn’t vote for him, but he’s my president, and I hope he does a good job.”

One has to wonder what is motivating every company’s recent awareness and concern about diversity. Have people in power suddenly awoken to the error of their ways and realized it’s important to consider historical injustices, or have they merely jumped on the bandwagon after the Black Lives Matter outcry which arose after George Floyd’s death in 2020? Are these companies truly developing concern for marginalized individuals and potential hurt feelings, or are they just concerned for their own bottom lines? It’s pretty obvious that many of these organizations’ diversity statements about “standing in solidarity” are not motivated by genuine values but by a desire to beat potential critics to the punch.

One of the liberal agenda’s biggest mantras is “starting conversations,” yet, ironically, the “woke” movement is very repressive of honest discussion. Rather than allowing open, authentic debate and collaboration between opposing voices, cancel culture has made many voices afraid to open their mouths for fear of being silenced. I noticed this troubling phenomenon during “Reframed,” for most of which the usually outspoken Ben Mankiewicz sat sullenly silent. When his turn to answer a question came, he spoke very carefully, as if afraid of saying the wrong thing. The only time Mankiewicz had any spirit was when denouncing Hollywood’s communist blacklist of the 1940s and 50s. Both he and Charles Tavish, as the only two men and Caucasians, seemed unsure whether they even belonged in the conversation. The panelists openly conjectured about “who gets to say what they think,” saying that the decision on which people’s opinions matter in such issues is “also selectively based on identities.” In a truly inclusive, non-racist, un-bigoted conversation, shouldn’t every person get to say what he thinks, regardless of his identity?