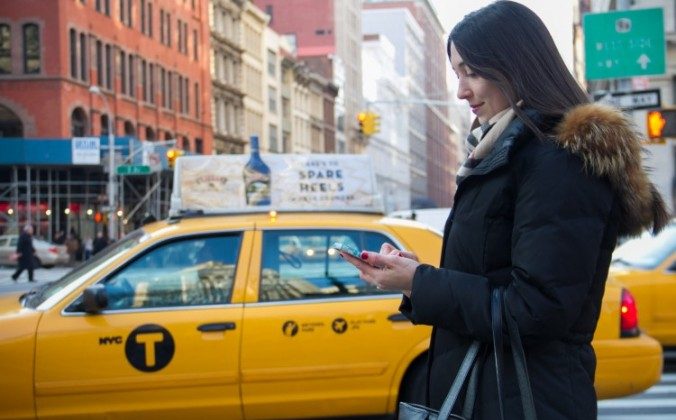 A woman uses her cellphone in front of a yellow taxi in Manhattan. A state supreme court lifted a restraining order on the e-hail program on June 6. (Ben Chasteen/Epoch Times)
New York

Taxi Magic Gets Rolling in NYC

Taxi Magic, Uber, and Hailo have been certified to accept e-hails by the city’s Taxi and Limousine Commission (TLC). The apps have been operating since a temporary restraining order was lifted by a state court on June 6.

Taxi Magic already operates in 56 cities in the United States, more than the other two apps combined. The company has been working with taxi fleets around the country since 2008.

“After all these years we’re finally able to e-hail [in New York City],” said Sanders Partee, president and co-founder of Taxi Magic. “It’s a dream come true for us here.”

The Taxi Magic app has been running for 11 days as of June 19. The company is known to work closely with fleet operators and local authorities. When NYC’s temporary restraining order was in effect, the Hailo app continued to operate, according to Mohammed R., a yellow taxi driver and Hailo user. Taxi Magic did not allow e-hails during that time in compliance with the court order.

Taxi Magic is fully functional, but a feature that would allow passengers to pay via smartphone is in the works. Partee said that New York City requires additional certification for e-hail apps to process payments and the company is a few weeks away from making the feature available. In the meantime, Taxi Magic agreed with a TLC proposal to certify without a payment feature and operate for free.

Taxi Magic is currently courting New York cab drivers to start using its app. Partee said it was difficult to approach drivers during work hours as they prefer to continue picking up fares. The company went instead to LaGuardia Airport, where drivers idling in wait of a fare are eager to learn about the technology.

“While they’re at the airport waiting in line, they have absolute downtime so they’re very happy to come chat with us,” said Partee. “We’re giving away phone holders, air fresheners, and various [other items] to help get their attention.”

Wait times for a Taxi Magic e-hail are estimated by the app to be anywhere from 4 to 11 minutes, depending on the location.

More than 2 million users have downloaded the Taxi Magic app. It powers more than 1 million rides per month. New York taxi drivers are joining more than 100,000 drivers that already use the app.