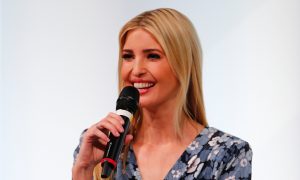 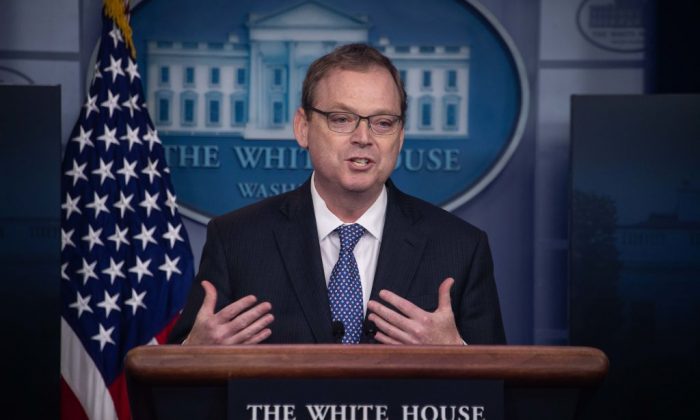 Kevin Hassett, Chairman of the Council of Economic Advisers, speaks during a briefing at the White House in Washington, DC, on September 10, 2018. (NICHOLAS KAMM/AFP/Getty Images)
US News

WASHINGTON—Some economists worry that aging baby boomers—people born between 1946 and 1964—will shrink labor supply and productivity, as they continue to retire in waves. However, such a worry is exaggerated, as baby boomers will stick around the labor force a lot longer than expected, according to White House economic adviser Kevin Hassett.

Speaking at an event hosted by Axios, Hassett said that the tax cuts had a big impact on baby boomers’ decision to stay in the job market.

Marginal tax rates don’t really change the decisions of young people, as they have to stay in the job market to gain skills, “but for people who are over 55, you get really big responses to changes in tax rates,” he explained.

With the tax cuts, there has been a big increase in labor force participation of people over 55, Hassett said, adding that an improvement in job opportunities and increase in wages have also helped the trend.

Hence, baby boomers will exit the job market at a pace slower than people have thought, he said.

“One of the reasons I’m optimistic is that more and more workers are returning to the labor force,” Elise Gold, senior economist at EPI, wrote in her report. “And, the vast majority of the newly employed are coming from out of the labor force, so lots of those workers who have (re)entered the labor force are getting jobs.”

For decades, the increase in labor force participation provided a sizable boost to economic expansion, thanks to the emergence of the baby boom generation and the entry of women into the workforce.

Participation, however, has steadily dropped since the turn of the century, from just above 67 percent to a low of below 63 percent. The rate has started to tick up again in recent months.

Businesses across the United States are struggling to find workers with the talents they need, and the problem is growing. As of December 2018, there were 7.3 million unfilled jobs, a 26 percent increase year-on-year. Meanwhile, 6.5 million unemployed Americans are looking for jobs.

Hassett said that the government spends a lot of money on training but almost all of it goes to people who are 21 or younger. With the rapid increase in innovation, however, many skill sets become obsolete over time, he said.

To resolve the problem, the White House has launched several initiatives, including a new program that pushes for more education for mid-and late-career workers.

President Donald Trump also signed an executive order in 2018, establishing the American Workforce Policy Advisory Board. The board brings together members from the private sector, educational institutions, and state and local governments.

The advisory board seeks to pull more Americans from off the sidelines and into the workforce by improving jobs data transparency and encouraging employer-led training and investments.

The board held its first meeting at the White House on March 6. Speaking at the meeting, Ivanka Trump, the president’s daughter and senior adviser, said that the board aims to increase the nation’s workforce participation by connecting workers with good-paying jobs.

“Just this past quarter, a remarkable 73 percent of people who started work had been out of the workforce the previous month, rather than being unemployed,” she said. “That’s the highest share of people entering the labor force from the sidelines since we started tracking this metric decades ago.”

Since the president signed the executive order, more than 200 companies and organizations signed a pledge to invest in workforce development by expanding apprenticeships and increasing on-the-job training. The companies will provide new training opportunities to 6.5 million people over the next five years.

According to the Associated Press, a survey by ManpowerGroup found that 54 percent of companies invested in training programs in 2018, up from 20 percent four years ago. One-third of the employers said they’re lowering their education and experience requirements, with some no longer demanding a college degree.

As the U.S. economy continues to expand, investment in workforce education and training have never been more important to sustain growth, stated a National Skills Coalition report, adding that nearly 80 percent of jobs require some form of education or training beyond high school.