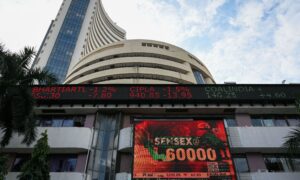 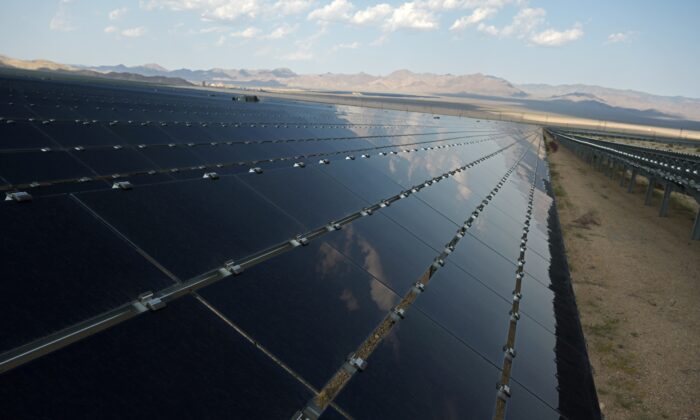 Solar panels are seen at the Desert Stateline project near Nipton, Calif., on Aug. 16, 2021. (Bridget Bennett/Reuters)
US News

Cheap imports have fueled the U.S. solar industry’s dramatic growth for years. Now, mounting trade and transport issues are exposing that dependence to slowing shipments and putting big projects at risk, according to industry representatives.

Tighter availability of foreign panels could hurt the booming industry and set back President Joe Biden’s effort to decarbonize the nation’s power sector, a centerpiece of his plan to combat climate change. Some 90 percent of U.S. solar panels are made overseas, according to the U.S. Energy Information Administration.

Among the issues clouding solar’s outlook is an attempt by U.S. authorities to block shipments of panels containing components potentially derived from forced labor in China’s Xinjiang region.

The Biden administration imposed an import ban targeting China’s Hoshine Silicon Industry Co. in June and since then, hundreds of megawatts of panels have been detained at the border, according to an industry source.

U.S. Customs and Border Protection would not disclose the number of solar products that it has detained. China has denied that its solar components are produced with forced labor.

At the same time, a tiny domestic solar manufacturing industry has submitted an anonymous petition calling on the U.S. Commerce Department to impose new tariffs on some imported panels over accusations of dumping products at artificially low prices.

The Commerce Department is expected to decide this week whether to consider the request, which would affect imports from Vietnam, Thailand, and Malaysia.

If imposed, those tariffs would jeopardize 18 gigawatts of solar projects by 2023, or enough to power more than 3 million homes, according to the U.S. Solar Energy Industries Association (SEIA).

The small group of domestic solar manufacturers say they remain anonymous because disclosure of their names “could lead to retribution against these companies and cause substantial harm.” Tim Brightbill, the group’s attorney, said the SEIA’s claims were “wildly overstated.”

U.S. solar developers say, however, that suppliers in Southeast Asia have already cut sales to the United States over fears their panels could get hit with retroactive levies if the Commerce Department proceeds.

Maritime shipments of solar modules into the United States were already down 11 percent in August compared to 2020, and down 2 percent for about the first three weeks of September, according to data from financial information provider S&P Global.

“We are getting hit right now pretty hard,” Markus Wilhelm, chief executive of solar project developer Strata Solar, said during a press call organized by SEIA on Monday. “We are completely dependent on a global supply chain, so we are a little bit more vulnerable.”

“We can’t get module manufacturers today to sign purchase orders that we need to deliver projects in the near term,” George Hershman, president of solar contractor Swinerton Renewable Energy, said on the call.

The issues compound a global supply squeeze stemming from the coronavirus pandemic that has already hit other industries with rising costs and delays, impacting everything from bicycle sales to the availability of smartphones.

The U.S. solar industry earlier this month said that its installations were running at a record pace despite the shipping bottlenecks and jump in costs, but that the new threats raised the risk of a future slowdown.

In addition to the immediate threat of new duties, the U.S. International Trade Commission will decide by the end of this year whether to extend tariffs imposed by the Trump administration in 2018 on all foreign-made panels.

One of the world’s largest panel makers, JinkoSolar, has been caught in the crosshairs of both the border seizures and the potential for new tariffs.

The company said earlier this month that some of its solar panels had been stopped at the border by U.S. Customs. The company is also among the Chinese companies targeted by domestic petitioners seeking new tariffs.

JinkoSolar did not respond to a request for comment.