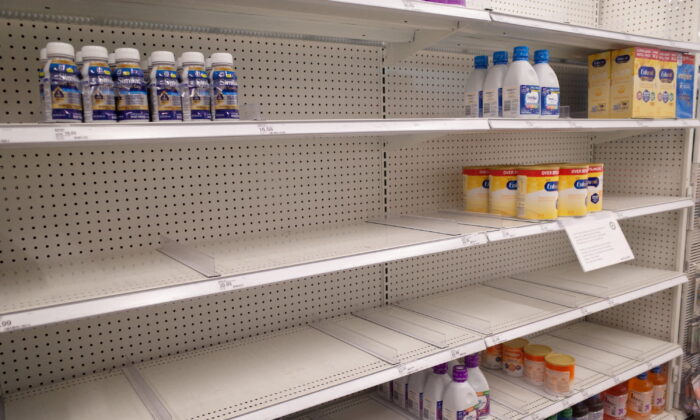 Similac and Enfamil products on largely empty shelves in the baby formula section of a Target store, amid continuing nationwide shortages in infant and toddler formula, in San Diego on May 25, 2022. (Bing Guan/Reuters)
Markets

NEW YORK—Target Corp. has begun carrying Bobbie brand infant formula in some stores this week and the vast majority of its locations will be selling the product by September, as the national shortage persists.

Bobbie, which has previously sold to consumers exclusively through its website, has increased its manufacturing output over the last few months by more than 30 percent, and is hoping to expand production further, Chief Executive Laura Modi said in an interview.

“We are prepared for this, and have enough inventory to show up on shelves across the country,” Modi told Reuters.

Target currently has online and in-store limits on how much formula shoppers can buy. Bobbie formula will be available on Target’s website this month. Target has roughly 1,900 U.S. stores.

The U.S. infant formula shortage stems in part from the closure of an Abbott Laboratories plant that manufactured specialty formulas, which re-opened this month. The plant closed after reports of bacterial infections and death in babies who consumed formula made at the plant.

The U.S. Food and Drug Administration this month said it is looking at ways to make it easier for new baby formula makers to enter the U.S. market and for those allowed under a temporary program to remain in the country for longer to mitigate the shortage.

The in-stock nationwide availability of powder baby formula has dipped a bit in recent weeks, to 69.6 percent for the week of July 3, from 70.7 percent in the week ending June 26, according to data service IRI.

Bobbie, which is manufactured in Perrigo Co plants, currently has a waitlist to become a new subscriber online.

Modi said the company has wanted to expand into brick-and-mortar retail because subscribers have asked where they can pick up extra cans if they are using more formula than expected.

Bobbie’s deal with Target includes displays at the ends of shopping aisles to educate consumers on the product, Modi said. The displays feature mats of turf to indicate the formula uses milk from grass-fed cows, she said.

“The formula aisle is a miserable, sad place to walk down,” Modi said, explaining that it often leaves new parents feeling guilty and dumbfounded. “Our desire to show up in retail is to change retail, and change how formula is showing up.”