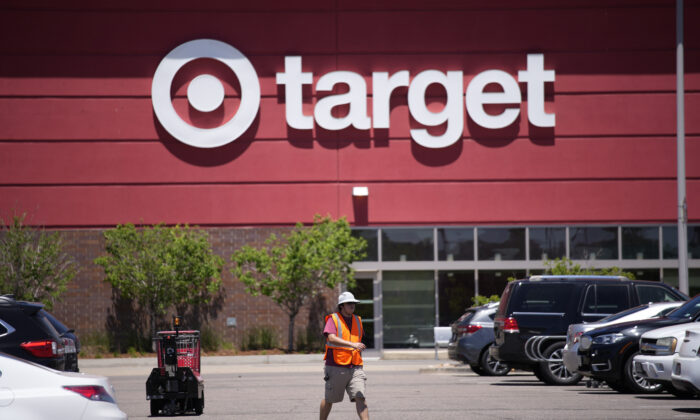 A worker collects shopping carts in the parking lot of a Target store in Highlands Ranch, Colo., on June 9, 2021. (David Zalubowski/AP Photo)
Companies

Target joins Walmart heading into the holiday shopping season with momentum. The biggest U.S. retailers are rerouting goods to less congested ports, even chartering their own vessels. Target also said it unloaded about 60 percent of its containers at off-peak times Target and Walmart are using their scale to keep prices comparatively low and perhaps most importantly, keeping its shelves full when so much is in short supply.

Yet the company has not been unscathed by soaring costs.

Its quarterly operating income margin rate during the quarter was 7.8 percent, up from 8.5 percent last year. Its gross margin rate was 28 percent, also up from last year’s 30.6 percent. The company cited higher merchandise and freight costs, on top of rising supply chain costs.

Some of those cost increases will be permanent, company executives said Wednesday. While supply chain bottlenecks should ease over time, Target is seeing rising prices from suppliers who are also wrestling with higher costs. Labor also remains tight and part of Target’s own cost increases come from staffing up to handle online orders.

Sales at stores that have been open for at least a year rose 9.7 percent in the three-month period that ended Oct. 30. That was on top of a 9.9 percent growth in the same 2020 span. Target reported double-digit sales growth across all five of its key merchandise categories including food and clothing.

Online comparable sales jumped 29 percent compared with a blistering 155 percent increase a year ago before vaccines against COVID-19 became available and many Americans steered clear of indoor spaces.

Target CEO Brian Cornell told reporters Tuesday that Americans have been shopping throughout the year, particularly during key periods like back-to-school and Halloween.

The company now expects that same-store sales for the fourth quarter will be up in the high single-digit to low double-digit percentage range, up from the previous guidance for a high-single-digit increase.

Also reporting quarterly earnings Wednesday was Lowe’s, which continued a string of topping Wall Street expectations in a red-hot housing market, as did Home Depot on Tuesday. In an interview with The Associated Press, Lowe’s CEO Marvin Ellison said the company secured the goods customers want and is in a “great position.