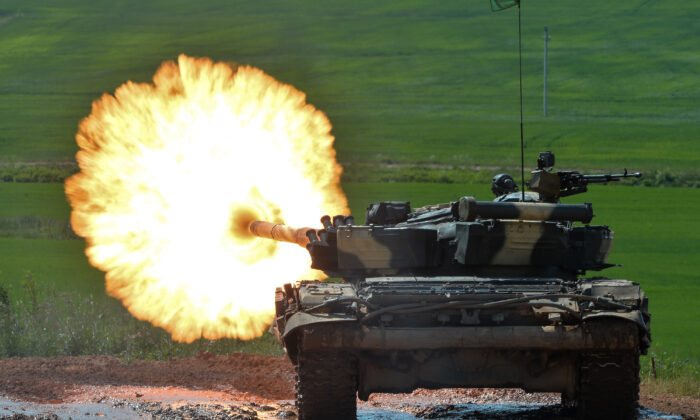 A Belarusian T-72 tank shoots at a target during a tank biathlon competition outside Minsk, Belarus, on June 17, 2017. (Maxim Malinovsky/AFP/Getty Images)
Russia-Ukraine War

Tanks Shipped to Ukraine as Kyiv Pleads for ‘Weapons, Weapons, and Weapons’

Kuleba issued the plea for more arms for his war-torn country in doorstep remarks to reporters in Brussels on April 7, ahead of a meeting of NATO ministers of foreign affairs.

“My agenda is very simple. It only has three items on it. It’s weapons, weapons, and weapons,” Kuleba said. “The more weapons we get, and the sooner they arrive in Ukraine, the more human lives will be saved.”

Met with Secretary General @jensstoltenberg at NATO HQ in Brussels. I came here today to discuss three most important things: weapons, weapons, and weapons. Ukraine’s urgent needs, the sustainability of supplies, and long-term solutions which will help Ukraine to prevail. pic.twitter.com/247GdqdPwj

Many Western military analysts have commented on the surprisingly staunch and effective Ukrainian resistance to Russia’s invading forces, thanks in part to the training and support provided by NATO allies in the eight years since Russia seized Crimea in 2014 and backed separatists in the Donbas region.

“Their successes up to this point have largely been with judicious use of portable, light equipment, including drones, anti-tank weapons, and air defense systems,” British military historian Lawrence Freedman wrote in an April 6 blog post, in which he said Ukrainian needs for the next phase of the war include heavier arms to continue their relative successes on the battlefield.

“They have a shopping list that has been discussed with Western donors to fill some of their gaps. This means keeping up supplies of the equipment they already use, but also providing the extra armor, aircraft, and artillery to raise their game for the coming operations.”

NATO Secretary-General Jens Stoltenberg, who spoke to reporters in Brussels alongside Kuleba, said NATO has provided support to Ukraine for years and that the alliance’s foreign ministers would, later in the day, discuss providing Kyiv with what it says it most needs to keep resisting Russian forces.

“Now Allies are providing equipment, support to you to uphold your right for self-defense,” Stoltenberg said. “And at our meeting later on with the NATO foreign ministers, I am certain that we will address the need for more air defense systems, anti-tank weapons, lighter, but also heavier weapons.”

The request comes as the Czech Republic, a NATO ally, in recent days became the first country to supply tanks to Ukraine, signaling a shift in the types of weapons that the alliance is prepared to supply to Kyiv as its military battles better-equipped Russian forces.

The Czech Embassy in the UK said in a statement on Twitter that the move marks the first time a foreign country has supplied tanks to Ukraine. The embassy shared an article by The Wall Street Journal that cited Czech Deputy Defense Minister Tomas Kopecny as saying that his country has sent more than a dozen modernized, Soviet-designed T-72M tanks to Ukraine.

“Much more, several times more, can be done if we join forces with other allies,” Kopecny told the media outlet.

Czech television showed footage of the tanks being loaded onto rail cars and being transported.

While Russia has repeatedly stated that it considers arms shipments to Ukraine to be legitimate targets, it has been unable to stem their flow.

Poland, through which runs a major arms supply route to Ukraine, also has a significant number of the T-72 tanks, with much media speculation in recent days being focused on whether Warsaw would supply them to Ukraine.

Wary of public discussions about the details of arms supplies to Kyiv after proposals for Warsaw to provide its MiG-29 fighter jets hit headlines and later fell through, Poland has been more guarded about disclosing any specifics.

Jakub Kumoch, head of the International Policy Bureau in Polish President Andrzej Duda’s office, told The Wall Street Journal that the details of discussions about weapons supplies wouldn’t be made public.

‘Not Just a Crime, but a Massive Miscalculation’

In an April 7 interview with Polish media, Kumoch was asked about the grisly images emerging from Bucha, a town near Kyiv, showing killed Ukrainian civilians, some with their hands bound and bearing signs of torture.

Ukraine has accused Russian forces of killing civilians in Bucha and perpetrating war crimes, with the Kremlin denying the claims and accusing Kyiv of staging a “monstrous forgery.”

Kumoch called what happened in Bucha “not just a crime, but a massive miscalculation” on the part of Russian President Vladimir Putin.

“These are scare tactics,” he said, arguing that Russia had deliberately resorted to killing Ukrainian community leaders in Bucha in a bid to terrorize the local population into submission. “But Ukrainians are a free people.”

Such tactics not only “don’t scare them, but they elicit their fury and their will to fight.”

Germany to Deliver ‘Everything That Makes Sense’

Other European Union nations, including economic powerhouse Germany, have vowed to provide arms and other forms of support to Ukraine.

German Chancellor Olaf Scholz spoke in the German Bundestag on April 6, saying that “it has to remain our goal that Russia does not win this war.”

Regarding weapons shipments to Ukraine, Scholz told lawmakers that “everything that makes sense and can quickly take effect will be delivered.”

Scholz also reiterated Germany’s plans to wean itself off Russian fossil fuels, which the EU as a whole is seeking to do in response to the Russian invasion.

British intelligence stated in an April 7 update that Russia is bombarding infrastructure targets to wear down Ukraine’s government and military as it prepares for a renewed assault on the country’s east.

Even as Russian forces progress with offensive operations in eastern Ukraine and as they’ve regrouped and refocused their military and logistics capabilities there, “Russian forces are likely to continue facing morale issues and shortages of supplies and personnel,” according to the update.