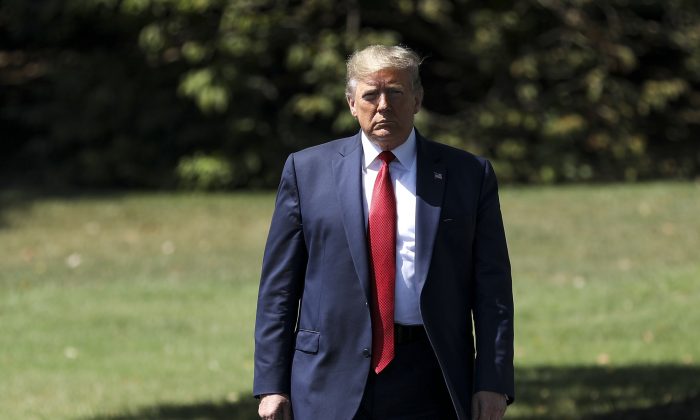 President Donald Trump walks toward the media before departing the White House on Marine One en route to Kentucky to speak at the American Veterans 75th National Convention, in Washington in Aug. 21, 2019. (Charlotte Cuthbertson/The Epoch Times)
Politics

Talk of Greenland Purchase a Deterrent to China and Russia, Defense Expert Says

Greenland’s basket of economic and strategic benefits, particularly when it comes to military advantage, isn’t going unnoticed, with the likes of China and Russia showing increasing interest in the sparsely inhabited island.

The implications of these two countries attempting to boost their influence over Greenland is concerning to the United States, a defense expert said. Aside from Greenland’s strategic value with regard to its geography and positioning, the island also has an abundance of minerals and oil.

President Donald Trump’s idea to potentially purchase the island isn’t as audacious as it sounds, Peter Huessy, a senior defense consultant and director of strategic deterrent studies at the Mitchell Institute for Aerospace Studies, told The Epoch Times.

“If Greenland was like Guam, we could deploy offensive, conventional missiles in northern Greenland along the Arctic and we would cover a very large portion of Russia and China,” he said in a phone call. “That would act as an extraordinarily good deterrent against their use of ballistic missiles of any kind against the U.S. or our allies.”

There are also trading benefits. China sees Greenland as a possible source of rare earths and other minerals and a port for shipping through the Arctic to the eastern United States. It called in 2018 for joint development of a “Polar Silk Road,” as part of Beijing’s “One Belt, One Road” (OBOR, also known as Belt and Road) initiative to build railways, ports, and other facilities in dozens of countries.

“[China and Russia] hope to be like the Panama Canal, they want to be the gatekeeper for transiting the Arctic,” Huessy said. “That has big implications for trade and commerce and economic issues. They are doing the same thing in the South China Sea.”

Trump’s recent talk about purchasing the island is sending a signal to the two countries to quiet their plans for expansion in the Arctic, Huessy said. Denmark essentially owns Greenland, which has a population of just over 56,000.

Strategically, Greenland forms part of what the United States views as a key corridor for naval operations between the Arctic and the North Atlantic. It is also part of the broader Arctic region and is considered strategically important because of its proximity to the United States and economically vital for its natural resources.

“It would be great if we could do all these things on our own and we wouldn’t have to go over to the Danish government to ask them,” Huessy said. “What Trump was doing was basically taking a shot at the Chinese saying, ‘Not so fast.’ He was basically throwing down a marker to the Chinese.”

Greenland is located between the North Atlantic and Arctic oceans and is dependent on Danish economic support. It handles its own domestic affairs, while Copenhagen looks after defense and foreign policy.

According to Huessy, Greenland would benefit significantly from being part of the United States, mainly economically. In 1946, then-President Harry S. Truman also pitched a plan to purchase Greenland.

“The minerals and oil are available per agreement with the government and EU rules; there are barriers to foreign investment and ownership; buying the territory would eliminate these barriers,” he said.

On Aug. 23, Trump said he received a call from Danish Prime Minister Mette Frederiksen, days after she called the idea of a purchase “absurd.” At the time, Trump criticized Frederiksen’s response, describing it as “nasty.”

“A wonderful woman. We had a great conversation. We have a very good relationship with Denmark,” Trump told reporters, adding that “she was very nice. She put a call in, and I appreciated it very much.”

Previously, Trump said he was interested in Greenland “strategically,” but its purchase is “not No. 1 on the burner.”

Russia has been raising its profile in the Arctic, creating or reopening six military bases shut after the Cold War ended in 1990, modernizing its Northern Fleet, including 21 new vessels and two nuclear submarines, and staging frequent naval exercises in the Arctic.

In May, U.S. Secretary of State Mike Pompeo said Russia was behaving aggressively in the Arctic, and China’s actions there had to be watched closely, as well.

The United States maintains an airbase in Thule in Greenland’s northwest under a 1951 treaty with Denmark. Washington wants a greater military presence in Greenland to better defend the base and enhance surveillance of the waters between the island and the European continent.

Greenland is thought to have the largest deposits outside China of rare earth minerals, which are used to make batteries and cellphones. Such minerals were deemed critical to economic and national security by the U.S. Interior Department in 2018.

In 2018, then-U.S. Defense Secretary James Mattis successfully pressured Denmark not to let China bankroll three commercial airports on Greenland, over fears they could give Beijing a military foothold near Canada, The Wall Street Journal reported.