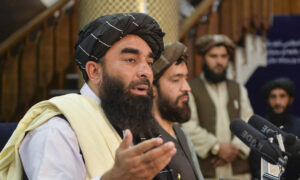 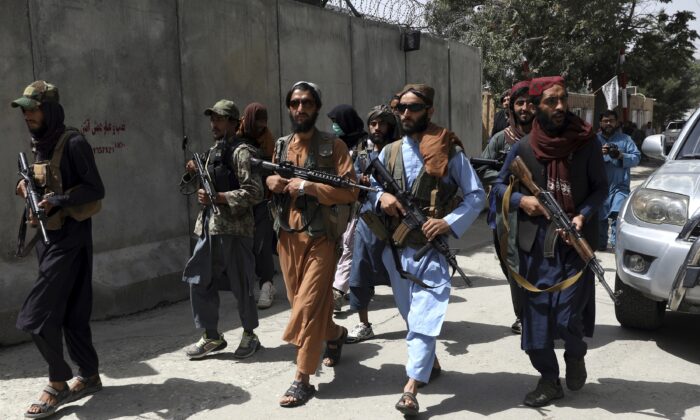 Taliban terrorists fired at a protest in eastern Afghanistan on Wednesday as a stampede at a gate to the airport in Kabul left another 17 injured.

Dozens of people gathered in the eastern city of Jalalabad to raise the national flag a day before Afghanistan’s Independence Day, which commemorates the end of British rule in 1919. They lowered the Taliban flag—a white banner with an Islamic inscription—that the militants have raised in the areas they captured.

Video footage later showed the Taliban firing into the air and attacking people with batons to disperse the crowd. Babrak Amirzada, a reporter for a local news agency, said he and a TV cameraman from another agency were beaten by the Taliban as they tried to cover the unrest.

A local health official said at least one person was killed and six wounded. The official was not authorized to speak to media and so spoke on condition of anonymity.

Meanwhile, videos from the Panjshir Valley north of Kabul, a stronghold of the Northern Alliance militias that allied with the United States against the Taliban in 2001, appear to show potential opposition figures gathering there. It’s in the only province that hasn’t yet fallen to the Taliban.

Those figures include members of the deposed government—Vice President Amrullah Saleh, who asserted on Twitter that he is the country’s rightful president and Defense Minister Gen. Bismillah Mohammadi—as well as Ahmad Massoud, the son of the slain Northern Alliance leader Ahmad Shah Massoud. It’s unclear if they intend to challenge to the Taliban, who seized most of the country in a matter of days last week.

“Taliban have won the judgment of sword and guns and now they are responsible for protecting the countrymen’s honor, wealth, and self-esteem,” he said in a statement.

The White House said no officials have been in touch with Ghani. The U.S. government and military is focusing on quickly evacuating Americans and Afghans, with the Aug. 31 pullout date looming.

U.S. and North Atlantic Treaty Organization (NATO) officials have blamed the rapid Taliban takeover on Afghan forces, saying the nationals lacked the will to fight for their country.

Another former Afghan president, Hamid Karzai, met with Taliban negotiators in Kabul on Wednesday, according to pictures from the Taliban.

In Afghanistan’s capital, people from across the world have tried to enter the U.S.-held airport to flee the country before America fully withdraws in a few weeks.

The Taliban has set up checkpoints around the facility, and has reportedly been using force, including whipping people, despite the U.S. threatening to respond with “overwhelming force” if the terror group interferes with evacuations.

Hundreds of people were outside the airport early Wednesday, with the Taliban letting barely any inside, and only after documents were shown to militants.

Many of the people outside did not appear to have passports, and each time the gate opened even an inch, dozens tried to push through. The Taliban fired occasional warning shots to disperse them.

Flights to America, France, and a slew of other countries have been departing from the Hamid Karzai International Airport, which is being protected by a force that includes U.S. troops and Afghan soldiers.

Like many flights leaving Kabul, it had empty seats, Australian officials said.

“The earliest evacuation flights in any evacuation tend not to have every seat filled because the process of getting any evacuation underway has a throughput issue. So, we believe that that is being resolved with each successive flight, and we will be putting 300 passengers on your average military cargo plane heading out of the country, one after another—hot onloading and hot offloading,” U.S. national security adviser Jake Sullivan told reporters in Washington.

The United States is hoping to evacuate as many as 9,000 people a day while the United Kingdom is aiming for 1,000 per day. They are among the countries willing to accept Afghans on special visas, primarily Afghans who helped allied forces over the past 20 years, and relatives of those Afghans.

The rush to evacuate includes nationals from various countries and Afghans who don’t want to be stuck in their homeland when foreigners fully pull out. They’re afraid of what the Taliban may do as the group plans to impose Sharia law—harsh rules based on an interpretation of Islam.

“The situation is very bad at the gate,” Lida Ahmadi, who applied for a special immigrant visa and ultimately got into the airport, told the Wall Street Journal. “I slept on the road last night. Now, after two nights and two days at the gate, we’ve finally got the chance to come in. I am so happy now.”

A NATO official told Reuters that 17 people were injured in a stampede at a gate to the airport as people tried gaining access.

About a dozen people were injured or killed at the airport on Monday, including two armed persons who were fatally shot by U.S. troops.