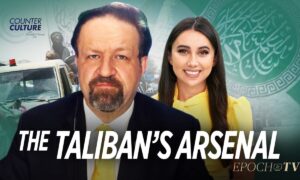 Afghans line up outside a bank to take out their money after Taliban takeover in Kabul, Afghanistan, on Sept.1, 2021. (Stringer/Reuters)
Economies

Afghanistan’s ruling Taliban terrorist group bolstered its economic team on Tuesday, naming a commerce minister and two deputies as the group tries to revive a financial system in shock from the abrupt end to billions of dollars in foreign aid.

Nooruddin Azizi, a businessman from Panjshir province north of Kabul, was named as acting minister of commerce and industry and would start work immediately, Taliban spokesman Zabihullah Mujahid told a news conference.

Azizi joins the acting finance minister and minister for economic affairs, both of whom were announced previously, in a team facing a daunting task.

Exacerbated by a drought that threatens to leave millions of people hungry, the economic crisis is among the biggest challenges facing the Taliban 20 years after they were driven from power by a U.S.-led campaign in the wake of the Sept. 11 attacks.

“We are working day and night on this and on making sure that the economic issue is resolved as soon as possible,” Mujahid told reporters.

He did not give concrete proposals as to how this could be achieved, but did promise that government workers who have been unpaid since at least July would start receiving salaries soon.

Underlining the economic pressures building on the Taliban, prices for staples like flour, fuel, and rice have risen and long queues are still forming outside banks as they strictly ration withdrawals.

Some humanitarian aid has started to arrive and limited trade has returned across land borders with Pakistan, but a severe cash shortage is crippling day-to-day economic activity and decades of war have left much infrastructure in tatters.

Foreign aid payments, which accounted for 40 percent of Afghanistan’s gross domestic product, have all but stopped as the West considers how to deal with a group that, until August, led a deadly insurgency against the U.S.-backed government.

Amruddin, a former member of the provincial council in the northern city of Kunduz, said farmers caught up in the war during the harvest season and the dire state of some of the country’s roads meant much of the produce had gone to waste.

“Kunduz is known as the bread basket of Afghanistan, but the economic situation, especially the agriculture situation in Kunduz, is miserable,” he said. “Farmers could not get products like melon and grapes to Kabul due to all the problems.”

In the cities, normally bustling commercial areas are unusually quiet, and impromptu markets have sprung up where people try to sell their household goods to raise cash.

Even before the Taliban seized Kabul on Aug. 15, 47 percent of the population lived in poverty, according to the Asian Development Bank, and a third survived on the equivalent of $1.90 a day.

While many people welcomed the end to 20 years of fighting between the Taliban and ousted Afghan forces supported by foreign troops, the economic crisis is causing the Taliban increasing concern.

Afghanistan’s central bank has been blocked from accessing more than $9 billion in foreign reserves held outside the country, and Mujahid said millions of dollars belonging to the state had disappeared before the Taliban entered the capital.

He said officials were making efforts to find out what happened to the missing cash that he said had been taken out of banks before the government of President Ashraf Ghani collapsed.

Banks are limiting withdrawals to $200 or 20,000 afghani a week for private citizens and many people say they cannot even access that. Potentially more serious in the longer term is the lack of work.

“Unfortunately, there are no job opportunities for us,” said one Kabul resident, who declined to give his name. He said he earned 1,000–1,500 afghani a day before the Taliban arrived but now had nothing.