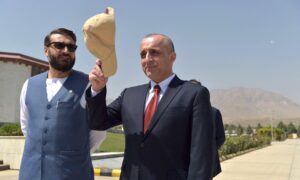 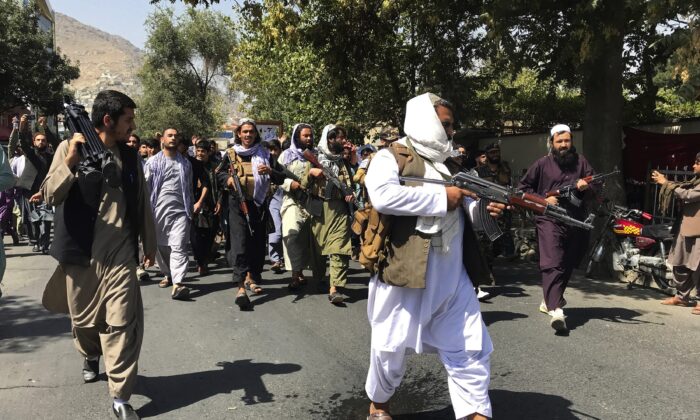 Taliban Declares Ban on Slogans, Protests That Don’t Have Its Approval

The Taliban on Sept. 8 announced a ban on all slogans, demonstrations, and protests that don’t have official approval in yet another signal that the Islamic terrorist group is taking a hardline and repressive approach to government.

A decree was issued on Sept. 8 by the head of the Taliban’s new interior ministry, Sirajuddin Haqqani, who is a member of the Haqqani network that has long been designated as a terrorist organization by the U.S. State Department. The department also has a $10 million bounty on Haqqani’s head, while the United Nations has Haqqani on a sanctions list.

Haqqani’s decree said that protesters without the Taliban’s permission to stage demonstrations in a stated time and location will face “severe legal consequences.”

Approval must also be given for any slogans that might be used during the protest.

The decree also accused Afghans protesting in Kabul and other provinces in recent days of “disrupting security, harassing people, and disrupting normal life,” telling citizens that “no one should protest and cause concern to the citizens” without permission from the Ministry of Justice.

It claimed, “The Islamic Emirate addresses the legitimate demands and rights of all citizens and must be given time to take the necessary steps to address other issues once security is restored.”

The announcement comes amid multiple protests in the country between Taliban fighters and demonstrators—including one protest led by local women in Kabul.

On Sept. 7, members of the terrorist group were seen firing shots into the air in an effort to disperse a large protest being held outside the Pakistan embassy in Kabul, while several reporters were arrested as they attempted to document the demonstration, according to reports.

Thousands of Afghan men and women took to the streets to protest against the Taliban and what they characterized as Pakistani intelligence’s interference in the affairs of the Middle Eastern nation and for allegedly being the guiding hand behind the Taliban’s return to power.

Demonstrators allege that Pakistan’s Inter-Services Intelligence (ISI) supported the Taliban’s latest offensive that routed resistance fighters in the Panjshir Valley north of Kabul—the last area where anti-Taliban resistance fighters have held out against the terrorist group. Islamabad denies this.

Some of the protestors carried signs reading “ISI stay away.” Others shouted slogans such as “Azadi [freedom or liberty]” and “Death to Pakistan.”

On Sept. 7, the Taliban announced its new government for Afghanistan, challenging claims to rightful government by former Afghan Vice President Amrullah Saleh, who says he is the “legitimate caretaker president,” according to the country’s constitution adopted in 2004. The Taliban’s cabinet notably doesn’t include any women or non-Taliban figures, despite the militant group vowing to form an “inclusive government” as part of the Doha Agreement.

The group named Mullah Mohammad Hassan Akhund as the country’s interim prime minister and co-founder Mullah Abdul Ghani Baradar as second in command, while Mullah Yaqoob will be the defense minister.

The international community has expressed concern over the lack of diversity within the Taliban’s so-called government, with the United States previously stating it wouldn’t recognize a Taliban-led government if it wasn’t inclusive.

“We note the announced list of names consists exclusively of individuals who are members of the Taliban or their close associates and no women. We also are concerned by the affiliations and track records of some of the individuals,” a spokesperson for the State Department said in a statement following the Sept. 7 announcement.

“We understand that the Taliban has presented this as a caretaker cabinet. However, we will judge the Taliban by its actions, not words.”

“We would want to see, in any situation, a diverse group in leadership which seeks to address the pledges that the Taliban themselves have set out, and that’s not what we have seen,” a spokesman for Johnson said. “We will continue to judge the Taliban on their actions.”

EU spokesperson Peter Stano said the new government “does not look like the inclusive and representative formation in terms of the rich ethnic and religious diversity of Afghanistan we hoped to see and that the Taliban were promising over the past weeks,” in a statement to media outlets.

Meanwhile, German Foreign Minister Heiko Maas said the exclusion of groups outside the Taliban, coupled with the violence perpetrated by Taliban terrorists against protesters and journalists in Kabul “are not signals that give cause for optimism.”

“It must be clear to the Taliban that international isolation is not in its interests, and especially not in those of Afghanistan’s people,” Maas said.