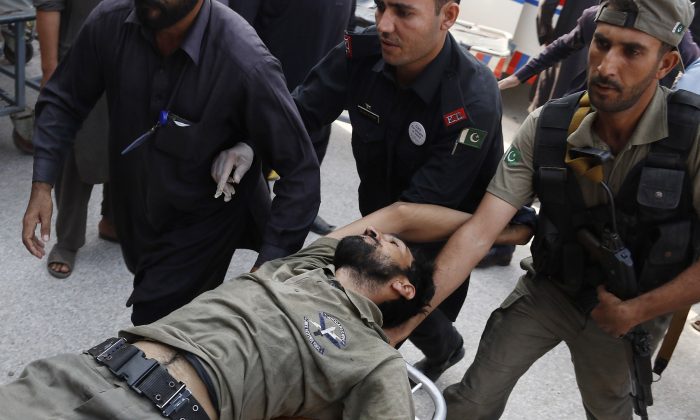 Pakistani security officials rush their colleague to a local hospital in Peshawar, Pakistan, on Sept. 18, 2015, after the Taliban launched a brazen assault on a military base on the outskirts of the northwestern city. (AP Photo/Mohammad Sajjad)
Middle East

Taliban Attack on Pakistan Base Kills 20; 16 Die in Mosque

PESHAWAR, Pakistan—A brazen Taliban attack on a Pakistani military base on the outskirts of the northwestern city of Peshawar killed 20 people on Friday, including 16 worshippers who were gunned down when the militants stormed a mosque inside the compound during prayers.

The attack triggered an hours-long firefight at the base and the Pakistani forces said they killed 13 of the attackers, though it was unclear how many were involved in the assault. Apart from 16 slain inside the mosque, three guards employed with the air force and an army captain were also killed, officials said.

The attack was a major blow for Pakistan’s military, which stepped up operations against the militants following a horrific Taliban attack last December at a Peshawar school that killed 150 people, mostly children.

In Friday’s assault, the attackers first stormed the guard room of the Badaber base, according to air force officials. The base was established in 1960s as an air force facility but has mostly been used as a residential place for air force employees and officers from Peshawar.

Army spokesman Maj. Gen. Asim Saleem Bajwa said 13 attackers were killed by the security forces. He said the attack was quickly repulsed and that the bodies of the slain “terrorist” were lying on the ground in the base compound.

However, details about how the Taliban managed to make their way into the mosque, which is inside the compound walls, and gun down 16 people during prayers were sketchy.

Bajwa said the militants entered the base from different directions in a two-pronged assault — apparently one push targeted the mosque — but that security forces quickly responded.

It was also unclear if any of the attackers got away.

According to Bajwa and a statement released by the air force, along with those killed, 10 soldiers were wounded in the firefight with militants, along with an unspecified number of civilians. The dead and most the wounded were taken to a military hospital in the area, where access was barred to reporters.

Five wounded security personnel and two civilians were brought to the main government hospital in Peshawar. It was not immediately clear whether the army would allow media access to the base, once it has been cleared.

One of the wounded security officials, Mohammad Rizwan, said he was coming out of the mosque when he was hit by a bullet.

“I fell down and I saw some of the attackers, but I don’t know what happened later, I fell unconscious,” he said.

Shortly after the attack, a suspected U.S. drone strike hit a home in the South Waziristan tribal region, south of Peshawar, killing at least three militants and wounding five, according to two Pakistani security officials who spoke on condition of anonymity because they were not authorized to talk to the media.

Earlier, in Tweets posted on social media, Bajwa said the country’s powerful army chief, Gen. Raheel Sharif, rushed to Peshawar and met with the security forces taking part in the clearing operation. He said Sharif will visit a military hospital where doctors were treating soldiers wounded in the attack.

A rescue officer said his crew transported at least 20 wounded to hospitals in the area. The officer, who spoke on the condition of anonymity because he was not authorized to speak to media, said there were no immediate reports of women or children among the wounded.

A spokesman for the Pakistani Taliban, Mohamad Khurasani, claimed responsibility for the attack. In a statement to the media, he said 14 Taliban fighters were involved in the assault. They offered “safe passage” to women and children after attacking the base, Khurasani said. He added that the Taliban “targeted” 50 security forces, without explaining what that meant.

Pakistani TV footage showed army helicopters hovering near the base, as police and troops surrounded the area.

Local police officer Shahid Khan Bangash said a large explosion was heard as the militants first tried to storm the base. “We are hearing that the attackers were armed with guns and rockets,” he said. Bangash said the attackers threw grenades at the guard room but were unable to enter the main area of the base.

Later in the morning, he said the firing had stopped and a search operation for the militants who might still be hiding in the area was under way.

Friday’s attack came a day after Pakistan reported the arrest a militant figure behind a recent failed attempt to target an air force facility in Kamra, also in the northwest of the country. Counter-terrorism officer Junaid Khan in the southern port city of Karachi, where the raid took place, identified the suspect as Umar Hayat and said he was being questioned.

The Pakistan air force has been playing an important role in the fight against militants since June 2014, when the army launched the much-awaited operation in North Waziristan, a restive tribal area along the Afghanistan border. Peshawar is the capital of Khyber Pakhtunkhwa province, which borders the tribal area. The air force frequently target militant hideouts in the tribal area and elsewhere.

The army says it has killed more than 3,000 militants so far in the North Waziristan offensive. The region was once considered to be the headquarters of the Pakistani Taliban who have been targeting security forces and public places in an effort to topple the elected government to enforce harsher version of Islam.