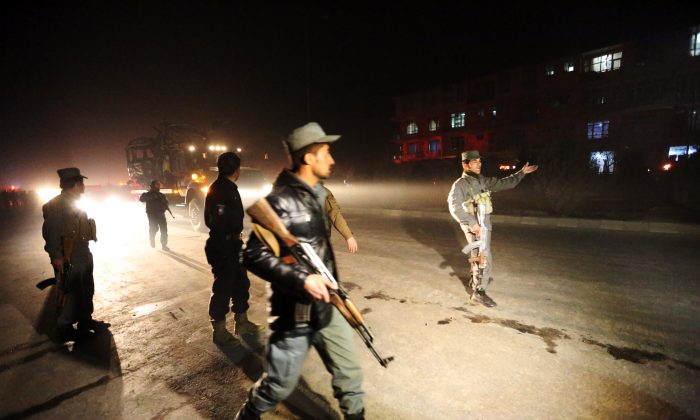 KABUL, Afghanistan—A deadly Taliban attack on a bus carrying employees of Afghanistan’s biggest TV station drew widespread condemnation on Thursday, with activists denouncing it as an attack on freedom of speech and the country’s young and fragile media sector.

A suicide bomber struck the minibus with workers from Tolo TV, owned by the private Moby Group, the country’s biggest media organization. At least seven people were killed and 25 were wounded in the explosion late Wednesay.

The bus was hit as it was passing near the Russian Embassy, which triggered initial speculation that the mission was the target.

But the Taliban quickly claimed responsibility and said they had specifically targeted Tolo TV, calling it an “spy agency” and saying they had made good on earlier threats to attack the station. Statements said the station’s vehicles had been under surveillance for some time.

Tolo is the most popular TV station in Afghanistan, providing viewers with a mixture of news, current affairs and talk shows, as well as soap operas and other entertainment. Moby Group is headquartered in Dubai and in 2012, Rupert Murdoch’s News Corporation took a minority stake in the company.

Along with another popular privately-owned station, 1 TV, Tolo was threatened by the Taliban in October following the broadcast of reports on the insurgents’ activities in the northern city of Kunduz, which the Taliban held for three days from late September.

The Taliban said the reporting was inaccurate, designated the two stations “military objectives,” and threatened unspecified consequences, referring to a report about allegations that Taliban gunmen had stormed a women’s hostel in Kunduz and raped the residents.

The emergence of a free and vibrant media is seen as a major achievement of post-Taliban Afghanistan.

A 2014 study by Altai Consulting found that 175 radio and 75 television stations had been set up since the 2001 U.S.-led invasion that toppled the Taliban, who ran the country from 1996-2001. The Taliban regime had one radio station, Sharia Radio, and banned television.

The New York-based group said journalists have been consistently threatened by the insurgents, including in December 2014, when the Taliban “explicitly threatened to attack any journalists seen as supporting Western values.”

“Afghan journalists have faced increasing intimidation and violence from both state and non-state figures in recent years,” HRW said.

The Afghan Journalists’ Federation called on the government to investigate the level of security provided for personnel at the threatened television stations, and on the owners to provide greater protection for the staff.

The attack was also condemned by acting Defense Minister Masoom Stanekzai, who described it as “heartbreaking.” The United Nations mission in Afghanistan called on the insurgents to rescind threats against the media.

The Interior Ministry’s spokesman Sediq Seddiqi said that just by doing their job, media professionals have become Taliban targets. By “revealing the truth to the public, the media become unacceptable for the Taliban,” he said.

The European Union’s mission in Afghanistan, which along with the U.S. mission is a strong advocate of media freedom in Afghanistan, called it a “horrific crime and an indefensible attack on a civilian target and a clear violation of international law.”