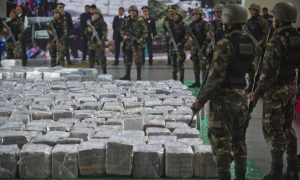 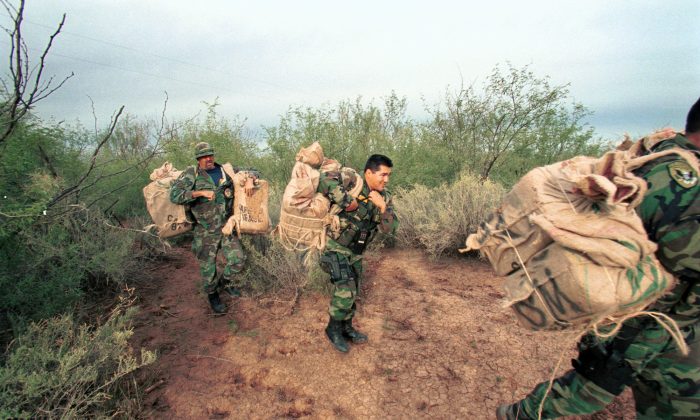 Native American Customs and Border Protection officers remove hundreds of pounds of marijuana in backpacks from the desert, near the Mexican border on the Tohono O’Odham Indian Reservation in Arizona, in this file photo. (U.S. Customs/Getty Images)
Viewpoints

Take Our Silver or Take Our Bullets

With all of the debate about “the wall” and the government shutdown, I was reminded of a briefing I attended in the Rayburn House Office Building in Washington, a little over a year ago.

The briefing took place in the office of a congressman from Texas, and the subject was gang-related drug smuggling from Mexico that was directly affecting his constituency in Texas.

At the briefing, people who lived on the Texas–Mexico border played video footage that had been secretly recorded at nighttime. The footage showed person after person coming into the United States with large backpacks. People were also seen returning to Mexico without the backpacks, leading to the logical conclusion that they were smuggling drugs into the United States.

Of course, the constituents used more than “logical conclusions” to build their case. They told first-hand stories about the threats they had received.

One of the most penetrating accounts related to signs that were found posted near the crossings. The signs said, “Take our silver or take our bullets.” In other words, the smugglers were willing to pay bribes to Texans who would look the other way, but those who tried to block the smuggling would be killed. The constituents said several families had moved from the area to escape the danger.

Smuggling from Mexico is dominated by competing cartels, the mix of which is constantly changing. Over the decades, they have grown, split apart, created new alliances, and fought one another for territory, but they are all violent.

According to the Council of Foreign Relations think tank, researchers estimate that since 2006, when Mexican President Felipe Calderon started an intensive campaign against them, the cartels have contributed to the killings of more than 100,000 people, including activists, politicians, and journalists.

Over the past decade, the U.S. government has committed more than $2 billion in funding and intelligence resources to supplement Mexico’s counter-narcotics efforts.

In 2015, 99.8 percent of methamphetamine and 99.9 percent of marijuana seized by federal authorities came across the southern border. The Drug Enforcement Administration (DEA) reported that Mexican drug cartels are the largest foreign source of heroin, methamphetamines, and cocaine. For the most part, Mexican suppliers produce the heroin and methamphetamine, while cocaine is primarily produced in Bolivia, Colombia, and Peru, and then transported through Mexico. Mexican cartels are also leading manufacturers and suppliers of fentanyl, an opioid that has recently contributed to an enormous epidemic in the United States.

It’s true that most of the drugs come into the United States in trucks and personal vehicles, not in backpacks. But that doesn’t change the reality of smuggling and the associated violence along the Texas–Mexico border. Nor should it diminish the importance of closing this avenue for the smugglers.

While most of the violence is still south of the border, it isn’t far from American populations. The epicenter may be in Ciudad Juárez, a Mexican city on the Rio Grande, just south of El Paso. In 2018, 1,247 homicides took place in that city, more than twice the average from the years 2013–2016, but less than the numbers from 2008–2011, when cartel violence was at its worst.

The reason for the fluctuation is that, at various times, different cartels and gangs try to gain control of the drug-smuggling routes. In August 2018, a gang calling itself “Artistas Asesinos,” or Assassin Artists, even released a video warning of violence along the border as it promised to shed blood to control the pipeline.

President Donald Trump repeatedly referenced the threat of drugs and violence in the United States due to Mexican cartels during his campaign.

Less than a month into office, he signed an executive order regarding “Transnational criminal organizations and subsidiary organizations, including transnational drug cartels, [that] have spread throughout the Nation, threatening the safety of the United States and its citizens.” The order noted that the criminal organizations “derive revenue through widespread illegal conduct, including acts of violence and abuse that exhibit a wanton disregard for human life.” He directed the federal government to do what it could to thwart them.

This concern about border safety and the violent episodes tied to Mexican drug cartels are an important part of the call to build a border wall. That means it’s also part of the reason for the partial government shutdown.

That shutdown is real, and it could affect my family. I have two nephews in the military and a son who works for the federal judiciary. Their paychecks may be impacted in the very near future. The threat from a porous border, however, is also very real. So, by wall or other means, controlling the border is an important objective for this or any administration.

On a related note, with recent legalization of marijuana in California and elsewhere, one might think that smuggling would soon become a thing of the past. Unfortunately, that doesn’t seem likely. According to the California Bureau of Cannabis Control, far fewer marijuana licenses were issued to retail stores in 2018 than had been anticipated. In fact, in 2018, legal cannabis sales amounted to $2.5 billion, which is $500 million less than sales in 2017, when only medical cannabis was legal, The New York Times reported.

The problem seems to be that, due to regulation and taxes, consumers end up paying about 35 cents in taxes for every dollar they spend on legal cannabis. That makes the black market an attractive alternative. Buyers pay about 45 percent less on the black market than they would pay at a licensed dispensary. The situation is serious enough that then-California Gov. Jerry Brown proposed allocating $14 million of the state budget to policing unauthorized marijuana; the proposal failed.

In light of all this, demand for illegal marijuana in California may actually be up. The stigma of using an illegal product is gone, and the fear of criminal prosecution is reduced. How concerned will police, prosecutors, or juries be about possession of a product that can be purchased legally? Of course, if the demand is up, the smugglers will certainly strive to meet it. Thus the need to control the border.