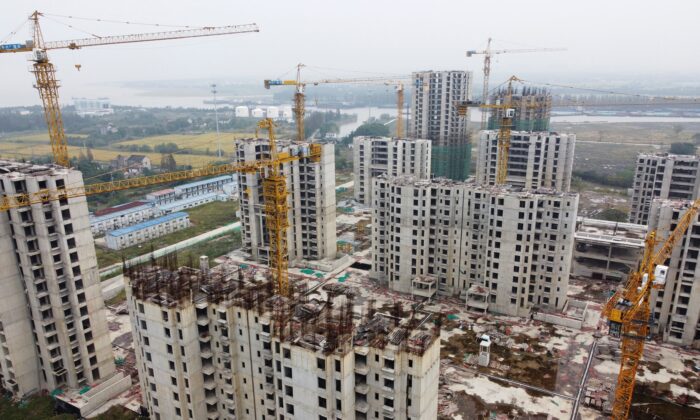 Chinese developer Evergrande has dodged default for the third time in a month but it is unlikely China’s broader economy can avoid damage from the property sector malaise. Upcoming data might show just how bad it is.

Whether December’s Bank of England meeting will be a “live” one may be determined by British data, especially on jobs. Finally, Turkey, defying near-20 percent inflation, seems set to cut interest rates again.

Eleventh hour payments of overdue interest are helping China Evergrande squeak clear of default; the latest one has momentarily staunched bleeding in credit markets. It is cold comfort as investors count the cost of a crippled property sector on China’s economy. Demand worries have pounded iron ore prices but despite signs of economic slowdown, the hoped-for policy easing is yet to meaningfully arrive. Home price data on Monday may show values stalled or even slowed last month. And the outlook isn’t bright, if desperate developers flood the market with discounted stock.

It bodes ill for a sector comprising a quarter of the world’s No 2 economy. It’s also a bad omen for consumption, seen slowing down in figures due Monday.

Tesla shares, whipsawed after co-founder Elon Musk asked Twitter users whether he should sell a 10 percent stake in the electric car firm, are in focus.

Nearly 58 percent of respondents to the poll backed a sale of the shares and according to stock market filings, Musk has sold about $7 billion of shares over recent days.

Tesla had an eye-watering run in October, its market value past $1 trillion. It accounts for about 2.1 percent of the S&P 500’s roughly $4 trillion market cap versus 1.8 percent when Tesla joined the index almost a year ago.

Markets are also watching for news on whether Jerome Powell will be renominated as Federal Reserve chief. Powell and Fed Governor Lael Brainard, a possible successor, were recently spotted at the White House.

After stunning markets on Nov. 4 by not delivering a widely anticipated rate rise, the Bank of England (BoE) said it wanted more evidence of labor market improvement. Two sets of data are due before its next meeting, the first on Tuesday.

Following good numbers for September, October jobs data will show if unemployment rose after the Sept. 30 expiry of a pandemic-time wage subsidy scheme that one million people were estimated to be on.

Inflation and retail sales data are out Wednesday and Friday respectively. A big inflation print alongside another retail sales decline will force the BoE to choose whether to act against inflation or nurture the fragile economy.

With an economy 0.6 percent smaller below pre-pandemic levels and risks growing of a damaging confrontation with the EU, a rate rise is the last thing Britain needs. But 4 percent-plus inflation may leave the BoE no option.

4. Turkey and the Cuts

Turkey’s central bank meets on Thursday. Although its currency has stumbled from record low to record low and inflation stands at around 20 percent, policymakers are expected cut rates further from the current 16 percent level, prioritizing growth over price pressures.

Yet the sinking lira, flirting precariously with the 10 to the dollar level, could spell trouble for an economy heavily dependent on energy imports—with firms and the government having a chunk of outstanding hard currency debt.

Turkey is a loner among global central banks that have already or are about to enter tightening cycles. South Africa’s central bank, also meeting on Thursday, is seen embarking on hikes soon while Indonesia is expected to hold rates the same day. Hungary is seen shifting hikes up a gear on Tuesday.

The war against COVID-19 is not over. Germany is battling record-high new cases, New Zealand is fighting off the highly infectious Delta variant and the Netherlands could soon impose a partial lockdown.

However, the United States feels confident enough to ease travel restrictions. Japan on Nov. 7 recorded no daily COVID-19 deaths for the first time in over a year.

Developed countries are already lining up to secure a new antiviral pill that shows promising efficacy in some trials. Economists compiling 2022 economic forecasts will be watching closely.