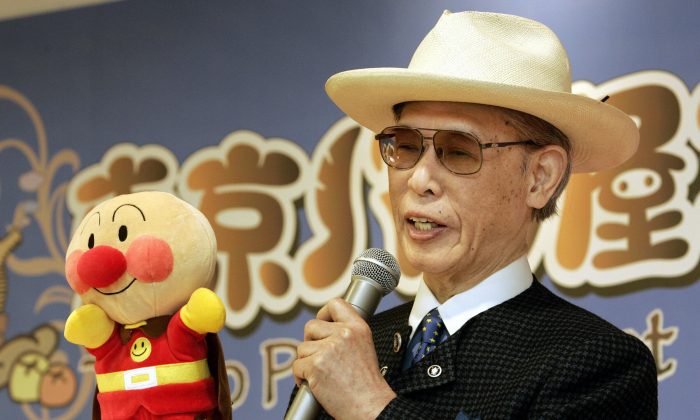 Holding a glove puppet of Anpanman, Japanese cartoonist Takashi Yanase delivers his speech during the opening ceremony of the Tokyo Panya Street, a theme park at the Tokyo-Bay Lalaport shopping mall in Funabashi, eastern outskirts of Tokyo, on Feb. 22, 2005.(Toshifumi Kitamura/AFP/Getty Images)
Entertainment

Manga and anime creator Takashi Yanase, known for the internationally popular series Soreike! Anpanman, died at the age of 94 on Sunday. He died of heart failure, reports the Anime News Network.

Yanase’s Soreike! Anpanman premiered in 1988, and the character Anpanman has appeared in dozens of other anime projects since. Anpanman uses his powers to protect his home town. Yanase was in his 70s already when his work became famous.

Before dedicating himself to manga, Yanase worked in advertising for the Mitsukoshi department store chain.

He was born in Tokyo in 1919, but grew up in Kochi Prefecture on Shikoku, according to Asahi. He served in the military starting in 1940 and he was in China during World War II.

As well as character design, Yanase wrote songs for the Anpanman series. He was also head of the Japan Cartoonists Association from 2000 to 2012.