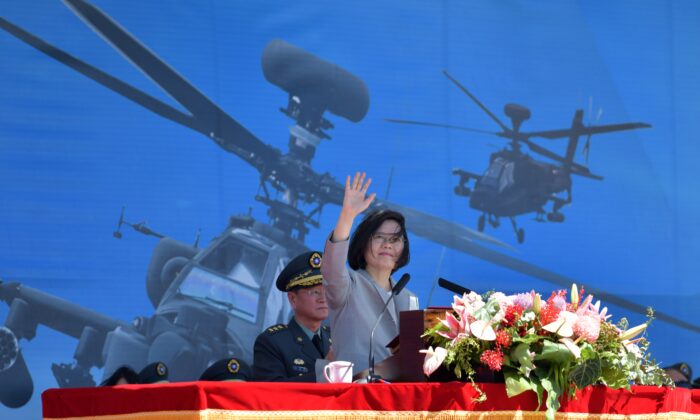 Taiwan's President Tsai Ing-wen waves during a ceremony to commission new U.S.-made Apache AH-64E attack helicopters at a military base in Taoyuan, Taiwan, on July 17, 2018. (Sam Yeh/AFP)
Thinking About China

Taiwan’s Military: ‘Break the Glass’ Before the Fire Starts

The Wall Street Journal recently broke the news that U.S. Special Forces and U.S. Marines have been secretly deployed to Taiwan for the last year to train Taiwan’s military. This apparent step-up in U.S. support for Taiwan got hopes up in some quarters and set off alarm bells in others.

The report was “kind of true” and “kind of not true.” The Marines and Special Forces appear to be the small training and observation teams that have been flowing in and out of Taiwan for many years. One suspects unnamed Biden administration officials blabbed to a reporter in hopes of showing that Team Biden is really backing Taiwan and standing up to China—after a week of large numbers of Chinese aircraft flooding Taiwan’s air defense identification zone.

Regardless, the report inadvertently highlighted the desperate need for U.S. forces and Taiwan forces to train together in a meaningful way.

Taiwan’s armed forces have experienced 40 years of near-isolation since Washington shifted diplomatic recognition from Taipei to Beijing in 1979. The defense relationship has suffered also from strict American-imposed limits on military-to-military interaction—in large part for fear of “provoking” the People’s Republic of China (PRC).

But the Americans won’t actually do joint exercises or operations with Taiwan’s military. And that’s the only way Taiwan’s armed forces will improve. One wonders how U.S. and Taiwanese forces can defend Taiwan if they never actually practice together.

Against the odds, and despite the “Galapagos effect” of long ago frozen evolutionary changes, Taiwan’s armed forces are still highly professional—even if underfunded and underappreciated. But they need to be much better.

The fact is, being ostracized is demoralizing—and contributes to flagging public confidence in the military. It’s not surprising that many people in Taiwan, including some in the government, doubt U.S. reliability. That leads to an unhealthy level of fatalism among many Taiwanese.

An even more serious problem is the accompanying encouragement to the PRC to calculate that, if it ratchets up the pressure and strengthens its forces, the Americans—even if they are willing—will be unable to intervene when the time comes.

Beijing has effectively had a veto on U.S. behavior toward Taiwan and that has in fact been the case for decades, despite the U.S. Congress declaring since 2016 in successive National Defense Authorization Acts (NDAA) that Taiwan and U.S. forces conduct joint training.

Yet both the Pentagon and successive administrations appear to consider Congressional wishes on this subject to be irrelevant.

Moving Beyond the Pro-Forma

If the U.S.-Taiwan military relationship is to move beyond the pro-forma, the United States must go first and draw Taiwan’s military out of isolation—show that it’s backing up a smaller friend facing a powerful bully. Do this, and Taiwan just might believe the Americans are serious—and be more willing to listen to American advice. Too often U.S. officials (mostly former ones) and academics cycling through Taiwan come across as noisome scolds.

Do some of this joint training and Taiwan Armed Forces’ skills will rapidly improve—as will American and Taiwanese interoperability.

Where to train? Besides Taiwan, Guam is a perfect training location, and there are other places elsewhere in the South Pacific where Taiwan still has a few diplomatic allies.

A natural outcome of this effort will be Taiwanese and American military personal interspersed in each other’s units and headquarters, as well as ships and aircraft using their partners’ ports and airfields.

Expect political and psychological knock-on effects in Taiwan, Washington, Beijing, and regionally. People will see Americans are committed. And friends like Australia, Japan, France, and Britain might join in. And perhaps a few “undecided” nations will come down off the fence.

If any country has a reason to join in, it is Japan. The expression “Taiwan’s defense is Japan’s defense” is often heard in Japan’s Self Defense Force, and Japanese officials and politicians have recently started to say this publicly. This isn’t surprising. If the Chinese regime “takes” Taiwan, it will be astride the sea lanes through which most of Japan’s energy imports and much of its commercial trade flows.

With a little will and imagination, breaking Taiwan’s military out of isolation is easily accomplished.

There are a number of joint training and exercise options for Taiwan and U.S. forces. Two examples include a Taiwan Air Force F-16 squadron deploying to Andersen Air Force Base on Guam and training with U.S. Air Force counterparts, or U.S. and Taiwan Navy ships conducting maneuvers at sea followed by port calls in Guam or Hawaii—or even Kaohsiung.

But here’s another more handsome proposal:

Create a Central Pacific Humanitarian Assistance/Disaster Relief (HA/DR) Force—using U.S. and Taiwan amphibious forces to plan, train, and exercise for HA/DR operations—and respond when disasters occur, as they frequently do in the Indo-Pacific.

Base the outfit in Taiwan and attach U.S. officers—such as from the U.S. Navy’s Seventh Fleet and 31st Marine Expeditionary Unit based in Japan that are well versed and prepared for disaster response.

Taiwan already has excellent HA/DR capabilities—combining both civilian and military resources. Indeed, Taiwan’s existing amphibious capabilities can easily be turned into a Taiwanese version of the U.S. Navy/Marines Corps amphibious force known as the Marine Expeditionary Unit (MEU)/Amphibious Ready Group (ARG). A MEU/ARG is a combination of Navy amphibious ships with Marines and their logistics and aviation assets aboard, trained, equipped, and ready to join fully in regional HA/DR missions and training exercises.

A notable advantage of joint exercising involving amphibious forces as opposed to “single service” (for example, air force to air force, navy to navy, army to army) is that it is the equivalent of CrossFit training—exercising air, sea, and ground capabilities at the same time. And it exercises skills that are 90 percent the same as for “regular” military operations, except for the shooting.

Conduct joint training along these lines and Taiwan’s military skills will rapidly improve—as will the ability to operate with American forces—and vice versa. One fairly compares Taiwan’s armed forces to a baseball team that never gets to actually play a game against another team, but only gets together with opponents for social engagements or to “talk about” sports. In such a case, improvement comes slowly or not at all.

In order to conduct joint training, both sides will need to perform the necessary joint planning that goes into the exercise, to include working out joint electronic communications, and then handle the essential “cross decking” of each side’s aircraft and personnel along with ship-to-shore movements during the execution phase of the exercise.

This is not easy, but it pays considerable dividends in the form of improved operational skill and confidence, and a genuine ability to operate together—or in other words, “jointly.” Beyond the operational benefits, there is the political significance of U.S. forces and the military of the world’s only Chinese democracy working together.

And afterwards, for a real pay-off, look for opportunities to join forces together in the event of a real world HA/DR contingency. Admittedly, some countries will resist or refuse relief assistance in which Taiwan forces are involved—for fear of angering China.

However, there are still a few countries recognizing Taiwan in the Indo-Pacific, as well as U.S. territories of Guam, Saipan, and American Samoa. All of these occasionally experience natural disasters and Taiwan’s HA/DR force can participate in response efforts. Moreover, with some effort, the United States might open up some doors elsewhere in the region. But it needs to make the effort.

Bringing this to fruition will require Taiwan liaison officers at U.S. Navy and Marine headquarters in Hawaii, as well as INDOPACOM—further deepening the day-to-day military interchange between the forces. And the Americans can assign Chinese-speaking Marines and Navy officers as liaison officers or even instructors to Taiwan forces. Each nation’s amphibious ships and aircraft making regular use of each other’s ports and airfields will also be a logical outcome.

The idea of a Central Pacific Humanitarian Assistance/Disaster Relief Force has been around for at least a decade. Perhaps it had its best chance during the Trump administration. But while the administration had some of the right people in the right places, it also had some of the wrong people in the wrong places—and they ensured the idea went nowhere.