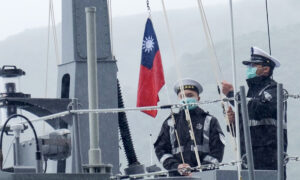 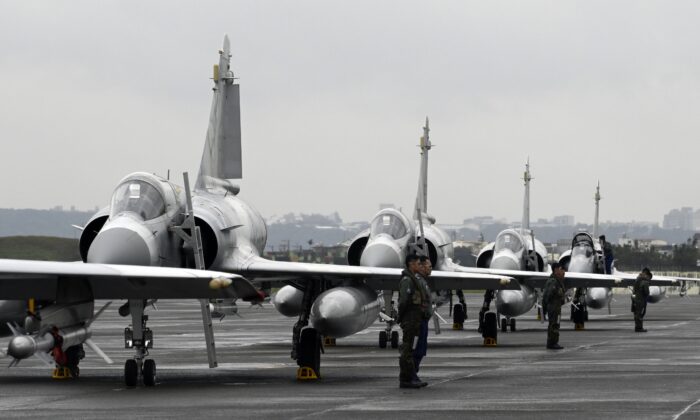 Taiwan air force pilots stand next to French-made Mirage fighter jets during an annual exercise at the Hsinchu air force base on Jan. 16, 2019. (Sam Yeh/AFP via Getty Images)
Asia & Pacific

On Sept. 13 to 15, Taiwan held its 37th Han Kuang Exercise, an annual military exercise of the Republic of China (Taiwan) Armed Forces. On Sept. 15, a Taiwan F-16V fighter jet demonstrated its ability to perform a swift landing, refueling, and take-off.

The three-day exercises aim to counter different scenarios of an invasion by the Chinese Peoples Liberation Army (PLA), such as losing the function of its main airports, runways, missile defense, or a bio-weapon attack. The exercise simulates how Taiwan’s military and medical personnel would respond to these scenarios.

According to Taiwan’s airforce command, the exercise fully demonstrated its military-civilian unity and enhanced its national defense and mobilization. Its strategic communication mechanism made the public understand the military’s training status and defense determination. Most importantly, it raised Taiwan’s national defense awareness by emphasizing to all its citizens the importance of “national recognition, national support, and national participation.”

Taiwan is strengthening its defenses against the Chinese Communist Party’s (CCP) increasingly aggressive military operations in the East China Sea and the South China Sea. The United States and its allies are also deepening military cooperation in the region and formulating strategies for more effective military responses.

The United States, the UK, and Australia on Sept. 15 announced a new trilateral security partnership for the Indo-Pacific amid rising Chinese assertiveness in the region. The first move under this partnership called “AUKUS,” will be for the United States and the UK to support Australia in acquiring nuclear-powered submarines, according to a joint statement by the three governments. The alliance is also set to enhance sharing of information in key technologies between the three countries.

In other parts of the region, the current U.S. administration has worked to bolster partnerships to counter the Chinese regime, most notably the informal “Quad” grouping of Australia, Japan, India, and the United States.

On Sept. 10, before the Han Kuang military exercise, Taiwan’s Foreign Minister Joseph Wu and National Security Council Secretary-General Wellington Koo attended a round of sensitive talks known as the “Special Channel” with senior U.S. officials in Annapolis, Maryland. The meeting, also known as the U.S.-Taiwan Strategic Dialogue or Monterey Talks. These talks are annual discussions about military affairs between the United States and Taiwan, including defense review and political and military dialogue.