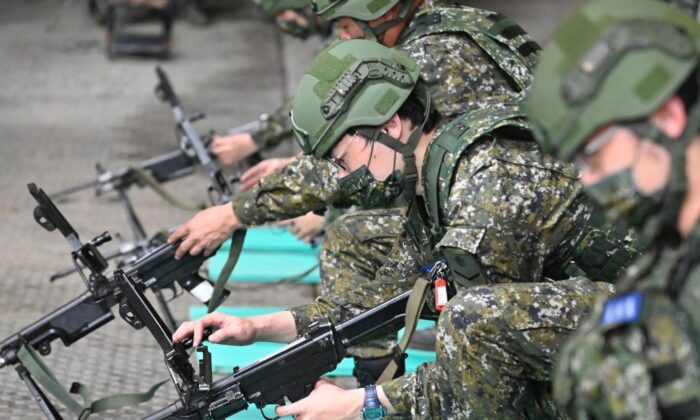 Taiwanese reservists take part in a military training at a military base in Taoyuan on March 12, 2022. (Sam Yeh / AFP) (Photo by SAM YEH/AFP via Getty Images)
Asia & Pacific

Following Russia’s invasion of Ukraine, lawmakers in Taiwan are calling for an increase in its military conscription period. Meanwhile, new polls show a majority of Taiwanese are both in favor of women joining the island’s compulsory military training and extending the duration of the training period.

A survey released on March 15 by the Taiwan International Strategic Study Society (TISSS), a Taipei-based think tank, shows a drastic increase in the percentage of Taiwanese willing to fight to defend the democratic self-ruled island from China since Russia began its invasion of Ukraine.

The results showed that 70.2 percent of the respondents are now willing to defend Taiwan if China took military action against the island, a substantial increase from the 40.3 percent who said they were willing to fight in a poll published on Dec. 28, 2021, according to Taiwan News.

The Chinese Communist Party (CCP) has maintained the claim that Taiwan is a part of its territory. However, the island has been self-governed since 1949 and has never been under CCP control. Taiwan has its own military, constitution, and democratically elected government.

Amid the continuous large-scale Chinese air force incursions into Taiwan’s airspace, Taiwanese lawmakers and scholars are debating on methods to enhance the strength of its military to defend its sovereignty.

Some opposition lawmakers in Taiwan have begun to urge its government to reinstate a one-year mandatory military service following the Russian-Ukrainian war.

“The Russian invasion of Ukraine has strengthened our determination to defend Taiwan, but we are far from ready,” said Chiu Hsien-chih, a legislator from Taiwan’s progressive, pro-independence New Power Party, Taiwan News reported.

The Taiwanese military discharged its last group of mandatory conscripts in December 2018 as it began the transition to a voluntary military system. However, all eligible male citizens are still required to participate in four months of military training.

Last week, Taiwan’s Defense Minister Chiu Kuo-cheng said that volunteers on four-year contracts make up 90 percent of its armed forces, and only a small portion are from four-year conscriptions. He added that Taiwan’s military combat capacity is the same as when it still enforced one year of mandatory military service.

Premier Su Tseng-chang said he supports open dialogue about the all-volunteer force and that policies should be created to provide extra training to willing reservists, according to Taipei Times.

A recent poll from Taiwan’s TVBS News Network shows that 56 percent of respondents support women joining mandatory military training, while 78 percent favor extending the military training period. And of those who favor extended service, over 80 percent believe the training should be at least one year.

In response to the topic, Defense Minister Chiu said that he is glad to see enthusiasm for defending the country from all members of society, adding that his ministry has already set up a task force to research various options and consider them accordingly, Taiwan News reported.

Ukrainians’ spirited resistance against Russian forces has spurred the willingness of Taiwan nationals to defend their sovereignty and stirred debate about Taiwan’s readiness for a potential attack from Beijing.

“Nobody wants a war,” Defense Minister Chiu said, adding that a conflict would be a disaster for all sides regardless of the outcome.

“The recent situation in Ukraine once again proves that the protection of the country, in addition to international solidarity and assistance, depends on the unity of the people,” Taiwanese President Tsai Ing-wen said on March 12.

Rising Tensions in The Taiwan Strait

A Ph.D. scholar from National Taiwan University, Tseng Chien-yuan, told The Epoch Times that military tensions in the Taiwan Strait are far higher than the tension between Russia and Ukraine prior to the war.

“Beijing’s [refusal to condemn Moscow] indicates what the Chinese Communist Party (CCP) is thinking about invading Taiwan,” Tseng said as he voiced support in restoring Taiwan’s compulsory military draft. “Our military needs to be better prepared, and the conscription restored and adjusted … regardless of gender … to meet the [heightened threats from Beijing].”

Military strategists worldwide have been analyzing the war in Ukraine, making comparisons to Taiwan, an island that would also be fighting a much more powerful foe, should the Chinese regime take a cue from Russia and invade its democratic neighbor.

Experts pointed out the fundamental difference between Taiwan and Ukraine.

Taiwan’s unique advantage is the body of water, called the Taiwan Strait, separating the island from China. Nonetheless, Ukraine’s landmass is roughly 17 times the size of Taiwan. If Chinese forces were to land in Taiwan, it’d be much more difficult to defend than that in Ukraine.

However, amid U.S. reluctance to become directly involved in Ukraine, confidence that it would come to Taiwan’s aid in the event of an attack from China has dropped significantly.

In October 2020, 55.1 percent believed the United States would come to Taiwan’s defense, while the latest survey found only 42.7 percent now count on U.S. intervention, while 47.3 percent think it will not participate, according to a Taiwan News report citing the TISSS survey.

Only 34.7 percent of respondents believe Taiwan has the ability to stand alone against China militarily without support from the United States.