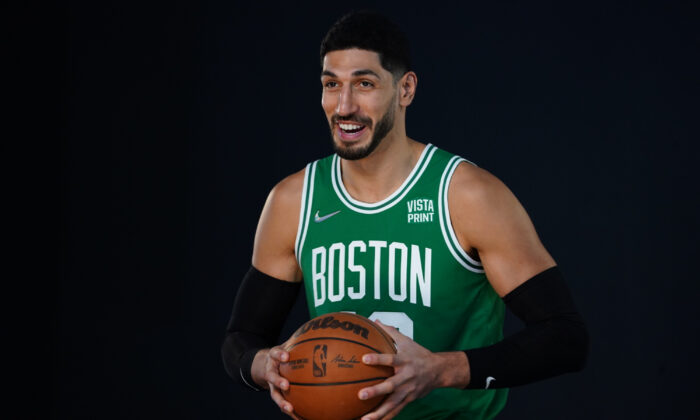 Taiwan Thanks NBA Player Enes Kanter for Supporting Its Democracy

NBA player Enes Kanter repeatedly called for people to  “stand with Taiwan” these days, and reiterated that “Taiwan is not a part of China.” Taiwanese President Tsai Ing-wen responded directly to Kanter’s tweet, thanking him for his support.

Kanter said he supported Taiwan’s self-governance in a video posted on Nov. 12. “Taiwan is a democratic and free country, and I support Taiwan,” he stated.

In the video, Kanter wore a shirt printed with the words “Taiwan is NOT China.” He reiterated that the world must stand with Taiwan, support it, and defend its democracy.

Tsai thanked Kanter directly in response to his tweet for standing with Taiwan, and vowed to “always defend our hard-earned freedom and democracy.”

Thank you @EnesKanter for standing with #Taiwan & standing up for democracy. pic.twitter.com/DNBJfMiSvl

Tsai said in the attached video that the support from international friends like Kanter “gives us strength.” She also cheered the NBA player, saying Taiwan’s basketball fans “are rooting for him.”

Kanter exclaimed on Nov. 13 that he is honored by Tsai’s “kind words,” and hopes to visit the “wonderful nation,” learn about its culture, taste its delicious food, and meet the “brave people.”

Enes Kanter also tweeted his support for Tibet, Hong Kong, and Uighurs in China, resulting in the removal of all live-streaming of Celtics games in China last month.

Kanter’s tweet on Nov. 10 asserted that “Taiwan will never surrender to the evil Chinese Communist Party.” I #StandWithTaiwan “The future of Taiwan must be determined by the Taiwanese people.”

In the tweet, Kanter posted photos of customized sneakers that displayed a man holding a banner reading “Stand with Taiwan” on one shoe, and another with a group holding a sign saying “Taiwan belongs to the Taiwanese people.”

The veteran center has worn sneakers on the court to support his vocal causes this season. The custom paint job was done by Chinese dissident artist Badiucao, who lives in Australia.

Taiwan will never surrender to the EVIL Chinese Communist Party.

Taiwan is a DEMOCRATIC and FREE country.

The future of Taiwan must be determined by the Taiwanese people.

Taiwan is NOT a part of China
and NEVER will be! #IslandOfResilience#FreedomShoes pic.twitter.com/3yxWnfbWLK

In a recent interview with CNN, Kanter explained: “People think I do politics, I don’t do politics. I do human rights.”

Kanter, who was raised in Turkey, has spoken out against Turkish President Recep Tayyip Erdogan. He has not seen his family since 2015, as Turkey allegedly canceled his passport.

Kanter said he is committed to using his platform to advocate for change, and will continue to educate himself on various human rights issues concerning China.

Beijing views self-governing Taiwan to be its territory, although the communist regime has never ruled the island.

Taiwan has developed into a vibrant democracy with its own democratically elected government, and is home to 23 million people. But China has increasingly threatened Taipei, with a record number of Chinese warplanes flying near Taiwan in recent weeks.

The Chinese regime has long declared “reunification” as the goal of ending Taiwan’s de facto independence and self-rule, and has refused to abandon the use of force to achieve that goal.