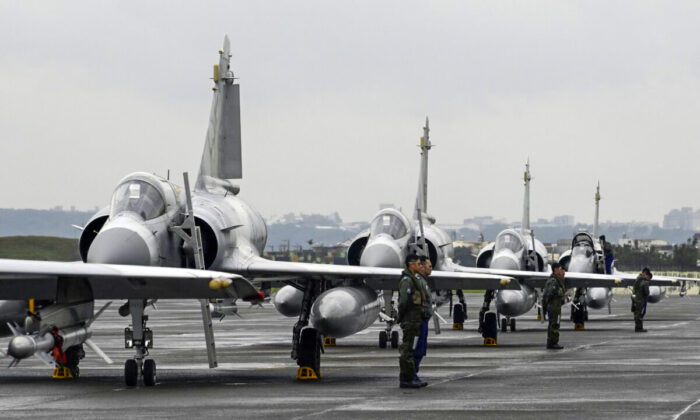 Taiwan air force pilots stand next to French-made Mirage fighter jets during an annual exercise at the Hsinchu air force base on Jan. 16, 2019. (Sam Yeh / AFP via Getty Images)
Military

Beijing sent 56 fighter jets into Taiwan’s air defense zone on Oct. 4 in its largest show of strength on record toward the self-ruled island that it claims as its own. The move also marked the fourth day of sustained military harassment against Taiwan that has seen nearly 150 warplanes fly into the zone.

For more than a year, tensions across the Taiwan Strait have been intensifying as Beijing heightened its military and diplomatic pressure on the island. The regime’s air force has made over 500 military incursions over the nine months this year, compared to 380 in 2020, according to Taiwanese authorities.

The latest cluster of maneuvers began on Oct. 1—the 72nd anniversary of the regime’s founding. Since then, 149 Chinese warplanes have flown over the territory.

With such activity, Beijing is asserting its military prowess while signaling its resolve to lay claim on Taiwan, experts have said.

Chang Yen-ting, a retired air force lieutenant general from Taiwan, believes that the actions are in part a response to the growing international attention on the democratic island.

The United States, Australia, Britain, and Japan have increasingly called out China’s military aggression in the Indo-Pacific region.

Taiwan has also applied to join the 12-nation trade pact known as the Comprehensive and Progressive Agreement for Trans-Pacific Partnership, or CPTPP, which China also seeks to enter.

Australia and Japan, meanwhile, have expressed reluctance over the prospect of having Beijing in the trade bloc over its use of economic coercion on countries it has disputes with. Both countries, along with Canada and the United States, have expressed support for Taiwan’s bid.

“Taiwan’s fight for greater international space is likely stepping on the CCP’s [Chinese Communist Party’s] red lines,” Chang told The Epoch Times, referring to Beijing’s position that international support for Taiwan constitutes a “red line” that cannot be crossed by other countries.

Wu Ming-chieh, a Taiwan-based military analyst, said the regime may further dial up the temperature in the coming days. As Chinese leader Xi Jinping seeks to secure his third term as the Party’s paramount leader next year, he is likely to present a tougher front to ease domestic pressure, he said.

However, this strategy is not without risk. “The bigger their moves, the more it could backfire,” he said.

Faced with U.S. criticism, the Chinese foreign ministry on Monday put the blame on Washington, warning that the arms sales to Taiwan and U.S. warships sailing through the Taiwan Strait would undermine bilateral relations.

“In the face of China’s challenges, our country’s government has always committed itself to improving our self-defense capabilities and resolutely safeguarding Taiwan’s democracy, freedom, peace, and prosperity,” it said in a statement on Oct. 3.