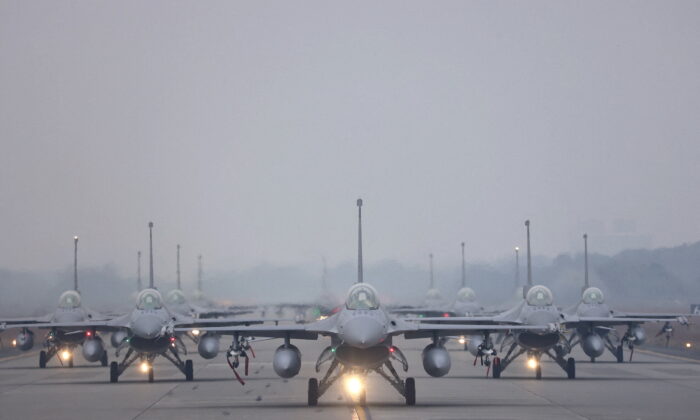 TAIPEI—Taiwan’s air force on Tuesday suspended combat training for its F-16 fleet after a recently upgraded model of the fighter jet crashed into the sea in the latest of a series of accidents.

The defense ministry said the F-16V, the most advanced type in Taiwan’s fleet, went missing from radar screens after taking off from the Chiayi air base in southern Taiwan for a training mission over a coastal firing range.

President Tsai Ing-wen issued instructions to spare no efforts in the search and rescue mission and “to further clarify the cause of the accident,” her spokesman said.

The government’s Rescue Command Center said witnesses had seen the aircraft crash into the sea and helicopters and ships were searching for the pilot.

Air Force Inspector-General Liu Hui-chien said the aircraft had only recently been upgraded to the “V” version, with new weapons systems and avionics.

Combat training for the F-16 fleet has now been suspended, he added.

In late 2020, an F-16 vanished shortly after taking off from the Hualien air base on Taiwan’s east coast on a routine training mission.

Last year, two F-5E fighters, which first entered service in Taiwan in the 1970s, crashed into the sea off the southeast coast after they apparently collided in mid-air during a training mission.

While Taiwan’s air force is well trained, it has strained from repeatedly scrambling to see off Chinese military aircraft in the past two years, though the accidents have not been linked in any way to these intercept activities.

China has been routinely sending aircraft into Taiwan’s air defense zone, mostly in an area around the Taiwan-controlled Pratas Islands but sometimes also into the airspace between Taiwan and the Philippines.