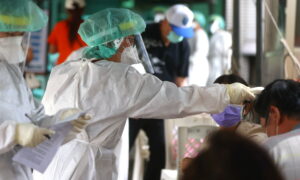 TAIPEI—Taiwan sees a limited impact on its economy and its key semiconductor industry from its COVID-19 outbreak and is well prepared to ensure chip fabs can operate as normal, officials said on Tuesday.

Tech-heavyweight Taiwan is experiencing an unusual spike in domestic cases after months of keeping the pandemic well under control, and has closed schools across the island and tightened curbs in the capital, Taipei.

National Development Council Minister Kung Ming-hsin told reporters that as long as the outbreak can be brought under control by the end of June then there would only be a 0.16 percentage point hit to gross domestic product.

However, that would rise to 0.53 percentage points if it took to the third quarter to control the outbreak, he said.

Taiwan’s economy grew at its fastest pace in more than a decade in the first three months of 2021 as the “work from home” boom sparked strong global demand for the island’s hi-tech exports.

Science and Technology Ministry official Andrea Hsu told the same news conference that tech companies had had a year to prepare continuity plans in case of a rise in COVID-19 cases, including splitting production teams.

No contact is being permitted between Taiwan’s main science parks where many of the chip fabs are located, she said.

“They’ve been very proactive,” he said.

Taiwan Semiconductor Manufacturing Co Ltd (TSMC), the world’s largest contract chip maker, said on Monday that from Wednesday it would start operating in separate teams to minimize the risk of COVID-19 infections.

As a major producer of semiconductors, Taiwan is central to global efforts to resolve a chip shortage that has shuttered some car plants around the world and is now starting to affect consumer electronics.