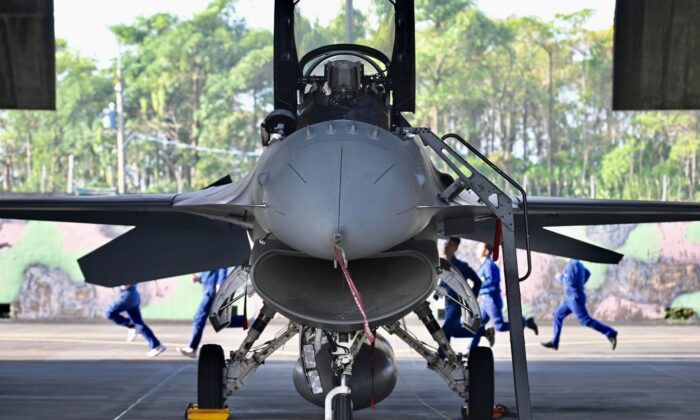 A group of Taiwan Air Force technicians run behind a US-made F-16V fighter jet during an exercise at a military base in Chiayi, southern Taiwan on Jan. 15, 2020. (Sam Yeh/AFP via Getty Images)
Asia & Pacific

Taiwan Says US Flies Bombers Near Island After China Drills

The United States is Taiwan’s most important international backer, even in the absence of formal diplomatic ties, and is also the island’s main source of arms.

Tensions spiked between Taiwan and China, which claims the island as its own, on Sunday and Monday, as Taiwan sent F-16s to shadow approaching Chinese bombers and fighters.

Tsai says Taiwan is an independent country called the Republic of China, its official name.

Taiwan’s Defence Ministry said one U.S. MC-130, a special mission aircraft based on the C-130 Hercules transport, flew down the Taiwan Strait in a southerly direction.

The two B-52 bombers skirted Taiwan’s east coast, also in a southerly direction, the ministry added.

Taiwan’s armed forces monitored both sets of flights, and nothing out of the ordinary was observed, it said, without giving more details.

The U.S. Air Force has a major base on the southern Japanese island of Okinawa, which lies close to Taiwan.

The Chinese regime has described its exercises on Sunday and Monday as actions to guard national sovereignty. It has never renounced the use of military force to unite Taiwan with the mainland.

Taiwan has urged China to focus its efforts on fighting the new coronavirus rather than menacing the island.

Taiwan Foreign Ministry spokeswoman Joanne Ou said in a statement earlier on Wednesday that China’s military activities had only caused anger on the island and harmed the peaceful development of relations across the strait.

“Our government will continue to adopt a pragmatic and restrained stance, prudently handle cross-strait relations, and deepen cooperation with countries with similar ideals, including the United States, in response to the rising Chinese military threat,” she added.