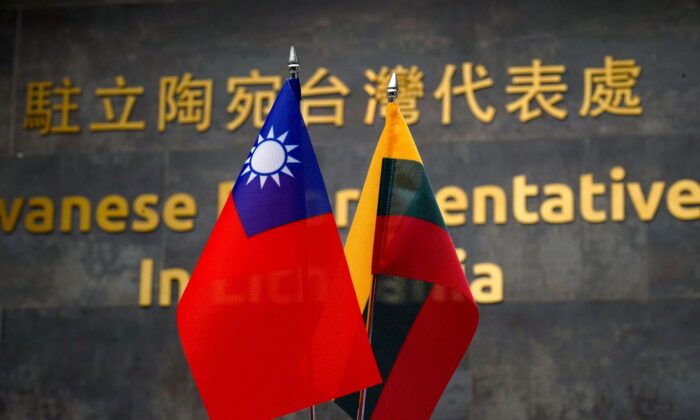 TAIPEI—Lithuania’s new representative office in Taiwan has already effectively begun operations though its physical location is still being fitted out, a senior Taiwanese diplomat said on Tuesday.

The Chinese communist regime, which claims Taiwan as its own territory, has downgraded diplomatic ties with Lithuania and pressured multinationals to sever links with the Baltic nation of 2.8 million people after it allowed Taiwan to open a de facto embassy in Vilnius.

Remus Chen, head of Taiwan’s Foreign Ministry’s Department of European Affairs, told reporters that the new Lithuanian representative Paulius Lukauskas had arrived in Taipei earlier this month, and on Monday had formally applied for his accreditation.

The new Lithuanian office was therefore “basically” now in operation, but office equipment is still being installed, Chen added.

The Chinese regime has repeatedly denounced Lithuania’s engagement with Taiwan.

The CCP says Taiwan is one of its provinces with no right to the trappings of a state.

Taiwan’s democratically-elected government strongly objects to the CCP’s claims, saying that the People’s Republic of China has never governed the island and has no right to speak on its behalf globally or decide its future.