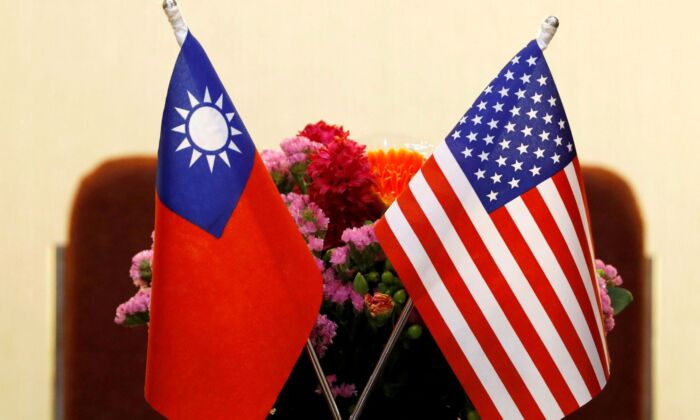 Flags of Taiwan and the United States are placed for a meeting in Taipei, Taiwan, on March 27, 2018. (Tyrone Siu/Reuters)
Economy

Taiwan Says Is Important Partner, Will Keep Talking to US on Currency

TAIPEI—Taiwan and the United States have mutually beneficial trade relations especially in technology, and the two have “smooth” communication channels and will keep talking to each other on currency issues, Taiwan’s central bank said on Saturday.

Taiwan, along with Vietnam, again exceeded the U.S. Treasury’s thresholds for possible currency manipulation and enhanced analysis under a 2015 trade law, but the department on Friday refrained from formally branding them as manipulators.

Responding, Taiwan’s central bank reiterated the trade surplus with the United States was due to the China–U.S. trade war, which has seen companies shift production from China to avoid tariffs, and soaring tech demand from U.S. consumers during the COVID-19 pandemic.

“The expansion of the trade surplus with the United States has nothing to do with exchange rate factors,” it said in a statement, repeating comments from a central bank official late Friday.

Taiwan’s current account surplus has also been affected by the same factors, with domestic savings growth contributing to the surplus as Taiwanese firms increased investment at home and people were unable to travel or spend as much due to the pandemic, it added.

“For a long time, our country and the United States have maintained close and mutually beneficial bilateral trade relations, and are important partners in the technology supply chain,” the central bank said.

“Communication channels between the bank and the U.S. Treasury are smooth, and the two sides will continue to communicate on relevant issues in the future on the basis of good interaction.”

The U.S. Treasury said it was working with Taiwan to develop a plan with “specific actions to address the underlying causes of Taiwan’s currency undervaluation and excessive external surpluses.”

The Taiwan dollar is up more than 2.5 percent against the greenback this year, among the best-performing Asian currencies.

Taiwan’s case is complicated by geopolitical pressures, including heightened military tensions with China, and the island’s position as a major exporter of semiconductors that are needed to help ease a supply shortage for U.S. manufacturers.