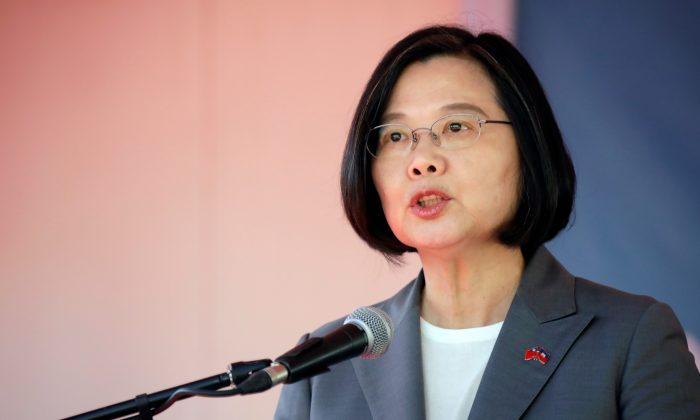 TAIPEI—Taiwan’s president rebuked China on Aug. 1 over its decision to ban individual travel permits for Chinese visitors to the self-ruled island, saying the move aimed to manipulate presidential elections in January.

China cited the state of ties with what it considers a wayward province for the travel ban, which came into force on Thursday. The loss of Chinese visitors could be a blow for Taiwan, which saw robust economic growth in the second quarter partly thanks to a spurt in mainland travelers.

“Using tourists as political tools would only create antipathy in Taiwanese people,” President Tsai Ing-wen told reporters in the presidential palace in Taipei, criticizing what she called a major strategic mistake.

“Tourism shouldn’t be politicized,” she said, adding that past experience had shown China manipulated politics by clamping down on tourist numbers ahead of elections.

A spokeswoman for China’s foreign ministry said history would show which side was making the mistake.

“Saying this is a mistake, I think that history will demonstrate who was on the correct side and who made a mistake,” Hua Chunying told a daily news briefing when Reuters sought comment on Tsai’s remark.

Taiwan’s relations with China are precarious. Beijing has long viewed Tsai with caution since she became Taiwan’s president in 2016, suspecting that she is pushing for the island’s formal independence.

China has never ruled out the use of force to bring the island under its control, if necessary.

However, Tsai faces an uphill battle in January’s election, amid criticism over her party’s reform agenda and as China ratchets up diplomatic and military pressure.

“I believe compatriots on both sides of the strait hope relations will return to a correct track of peaceful development, allowing travel by mainland residents to Taiwan to return to normal as soon as possible,” Ma was cited as saying by mainland state television.

Tsai said China had triggered regional tension with military drills this week near Taiwan, describing them as intimidation ahead of the election.

“The Chinese military threat is targeting all Taiwanese and impacting peace, stability and safety in the region,” she said.

The exercises came days after Beijing reiterated it was ready to fight if there was any move toward independence for Taiwan.

Taiwan is among a number of flashpoints in U.S.-China ties, which also include a trade war between the two countries and China’s increasingly muscular military role in the South China Sea, where the United States also runs freedom-of-navigation patrols. Last week, a U.S. warship sailed through the Taiwan Strait, angering China.

The United States is the main arms supplier to Taiwan. In July, the Pentagon said the U.S. State Department had approved sales of weapons requested by Taiwan, including tanks and Stinger missiles estimated to be worth $2.2 billion.