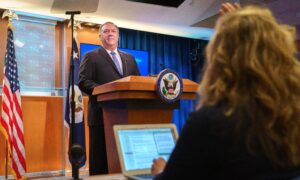 Pompeo: 'Taiwan Has Not Been a Part of China'
0
Share Now
TelegramFacebookTweetEmailTellMeWeReddit
Copy Link

The Fitch Ratings logo is seen at their offices at Canary Wharf financial district in London, on March 3, 2016. (Reinhard Krause/Reuters)
Asia & Pacific

Taipei—Taiwan’s government scolded Fitch Ratings on Friday for calling the island part of China for the first time, in an announcement on upgrading Taiwan’s economic outlook, and said it was talking to the company about the issue.

The Chinese Communist Party (CCP), which claims democratically ruled Taiwan as its own territory, has pressured foreign companies to refer to the island as Chinese territory, often using the terminology “Taiwan, China”, which they generally do to avoid losing access to the enormous Chinese market.

Fitch’s press release used the expression “Taiwan, China” three times, including in the headline, though the statement did make other references to Taiwan without the addition of the word China.

Taiwan’s Finance Ministry expressed “deep regret” at the name change and asked Fitch to revert to its previous convention of just using the word “Taiwan”.

“The ministry will continue to talk to the company to get them to acknowledge this problem,” it added.

A spokesperson for Fitch Ratings said: “The change to our naming convention for Taiwan was an operational decision”. It did not elaborate.

The statement was otherwise positive for Taiwan, with Fitch upgrading it to “AA” from “AA-” with a stable outlook, saying the economy had outperformed its peers during the coronavirus pandemic.

Fitch is not the only ratings agency to refer to Taiwan in this way. Moody’s also uses the formulation “Government of Taiwan, China” in some of its communications.

The Chinese regime’s claims over Taiwan are a frequent source of anger in Taiwan, whose people have shown no interest in being ruled by the autocratic CCP.

The CCP has never ruled Taiwan, and its regime has no say in how the island is governed.