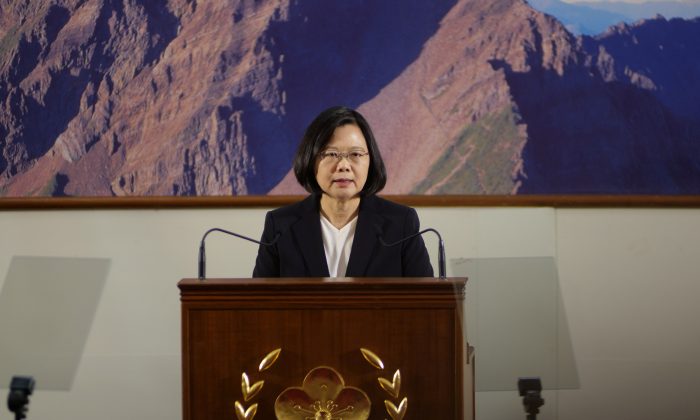 TAIPEI—Taiwan President Tsai Ing-wen said on Friday China’s military ambitions are becoming more apparent and tension between Taiwan and the mainland must not be resolved through military force.

Tsai has faced increasing hostility from China since she won election early last year, with China stepping up military drills around Taiwan.

China suspects Tsai, from the pro-independence Democratic Progressive Party, wants to push for the self-ruled island’s formal independence, a red line for Beijing, which considers Taiwan a wayward province and sacred Chinese territory.

“China’s military activities don’t only impact the situation in the Taiwan Strait, but also in all of East Asia … This is not a problem being faced alone by Taiwan,” Tsai told reporters.

“All countries in this region who want to see peace and stability, have a consensus … and China can’t ignore this, that cross strait issues absolutely can’t be resolved through military force but through peaceful means,” Tsai said during a news conference on a stage flanked by two models of fighter jets.

Tsai, however, said her island would not be passive in the face of a more hawkish China.

“Over the past year, the morale of our military is steadily improving, support for our military is also continuously increasing. This is the most gratifying thing since I’ve become president. I hereby solemnly announce that our annual defense budget will grow steadily within a reasonable range.”

Taiwan’s defense ministry warned in a white paper this week that China’s military threat was growing by the day, with the Chinese air force carrying out 16 rounds of exercises close to Taiwan over the past year or so.

Beijing says the drills are routine and that Taiwan had better get used to them.

“We live in a fast changing geopolitical environment; China’s ambition in military expansion in the region is becoming more apparent, as evident by the People’s Liberation Army’s frequent aerial and naval activities,” Tsai said.

China has warned Taiwan against “using weapons to refuse reunification” and China’s state media has prominently featured pictures of Chinese jets flying close to the island.

Tsai has stressed she wants peace across the Taiwan Strait, but has pledged to defend Taiwan’s security and way of life.

Taiwan is well equipped with mostly U.S.-made weapons, but has been pressing Washington to sell more advanced equipment.

Democratic Taiwan has shown no interest in being run by Beijing. Taiwan’s government has accused Beijing of not understanding what democracy is about when it criticizes Taipei.