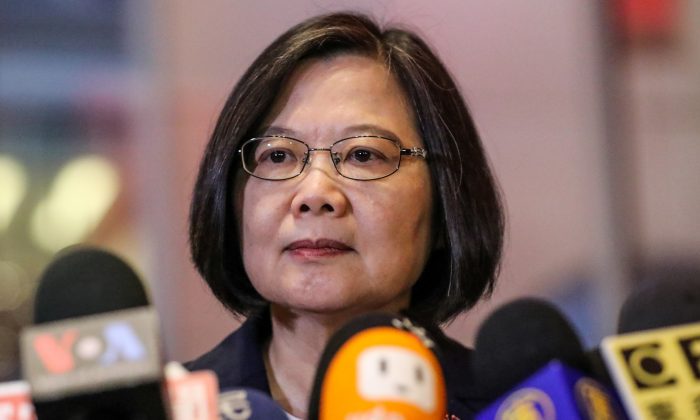 NEW YORK—Taiwanese President Tsai Ing-wen arrived in the United States on July 11 on a trip that has angered Beijing, warning that democracy must be defended and that the island faced threats from “overseas forces,” in a veiled reference to China.

China’s ruling Chinese Communist Party (CCP), which claims self-ruled and democratic Taiwan as its own and views it as a wayward province, had called on the United States not to allow Tsai to transit there on her overseas tour.

“I want to reiterate that Taiwan is not, and will never, be intimidated,” Tsai told a reception in New York for representatives of Taipei’s 17 remaining diplomatic allies, almost all small Central American, Caribbean, or Pacific nations.

Honored to attend a special reception for @iingwen hosted by the permanent missions of #Taiwan’s allies to the @UN. Very impressed by the staunch support! JW #JFDS2019 pic.twitter.com/7bNrRhqAn9

“The challenges we face only serve to strengthen our resolve to engage with the international community,” she said. “The 23 million people of Taiwan have a right to participate in international affairs and this right should not be subject to political preconditions.”

Tsai is spending four nights in the United States—two on the first leg and two on the way back from a visit to four Caribbean allies. She began her trip in New York and is expected to stop in Denver on her way back.

Shortly before Tsai was due to arrive at her Manhattan hotel, a Reuters photographer witnessed a brawl at the hotel’s entrance between a small group of pro-China and pro-Taiwan demonstrators, which was eventually broken up by police.

The New York Police Department was not immediately able to comment on whether there had been any arrests.

Hundreds more pro-Taiwan demonstrators had gathered outside at the hotel to welcome the Taiwanese president, while a smaller group of pro-China protesters were gathered across the street in opposition of the visit.

Tsai was last in the United States in March, but her stops this time will be unusually long, as normally she spends just a night at a time in transit.

The U.S. State Department has said there had been no change in the U.S. “one-China” policy, under which Washington officially recognizes Beijing and not Taipei, while assisting Taiwan.

However, analysts said the extended stopovers served to emphasize the Trump Administration’s support for Tsai at a time when she has been coming under increasing pressure from Beijing with which Washington has been engaged in a year-long trade war.

Speaking before departure at Taipei’s main international airport at Taoyuan, Tsai said she would share the values of freedom and transparency with Taiwan’s allies, and was looking forward to finding more international space for Taiwan.

“Our democracy has not come easily and is now facing threats and infiltration from overseas forces,” Tsai said, without being specific.

“These challenges are also common challenges faced by democracies all over the world,” she said. “We will work with countries with similar ideas to ensure the stability of the democratic system.”

Any state visit is a group effort. Before we embark on my Journey of Freedom, Democracy, Sustainability tomorrow, I want to thank my team as they are all working hard on the advance work, logistics, security, & all the details to ensure a successful #JFDS2019 pic.twitter.com/CUTSQ4QBkW

Taiwan has been trying to shore up its diplomatic alliances amid pressure from China. Tsai will be visiting St. Vincent and the Grenadines, St. Lucia, St. Kitts and Nevis, and Haiti on her overseas tour.

In New York, Tsai will meet with members of the Taiwanese community.

The State Department described Tsai’s visit as “private and unofficial” and said she would be greeted in New York by James Moriarty, chairman of the American Institute in Taiwan, the de facto U.S. embassy in Taipei. It did not respond when asked if Tsai would have contact with any other U.S. officials.

Seeking to bolster Taiwan’s defenses, the United States this week approved an arms sale worth an estimated $2.2 billion for Taiwan, despite CCP criticism.

Pleased that the #US government has approved another arms sale package, boosting #Taiwan’s self-defense capabilities. We’ll continue to speed up investment in national defense, & partner with like-minded countries to defend democracy while promoting regional peace and stability. pic.twitter.com/dw4Rw58hYb

Tsai, who is up for re-election in January, has repeatedly called for international support to defend Taiwan’s democracy in the face of Chinese threats. Beijing has regularly sent military aircraft and ships to circle Taiwan on drills in the past few years.

Douglas Paal, who served as U.S. representative to Taiwan from 2002 to 2006, said Tsai’s extended stopovers showed U.S. approval for the “caution and restraint” she had shown in her dealings with Beijing.

“It makes sense to reinforce that with generous transit treatment,” he said. “This is also … a message to China. The U.S. government believes Tsai is behaving responsibly in respecting the framework of U.S.-China-Taiwan relations.”

Paal said the Trump Administration had yet to indicate a significant shift in the traditional U.S. approach to Taiwan, but this could change in the event of a deterioration of U.S. relations with Beijing.

“It’s like an engine running at a high idle,” he said. “Trump has not engaged the gears, but there is a lot of activity at lower levels seeking to upgrade relations. So change has not occurred in a big way yet, but it could happen at any time. With unpredictable consequences.”

By Michelle Nichols and Carlo Allegri