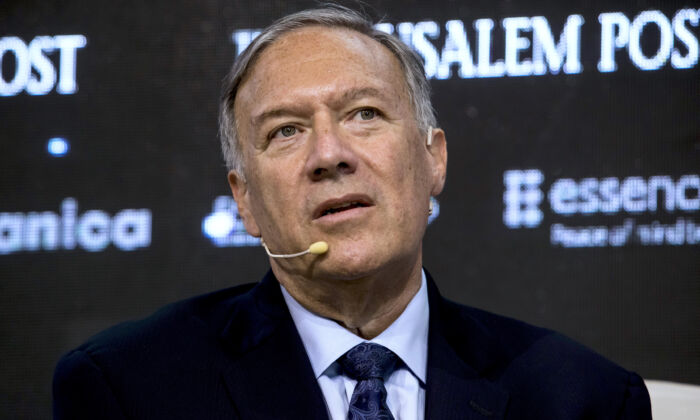 Former US Secretary of State Mike Pompeo speaks at a conference in Jerusalem, Israel, on Oct. 12, 2021. (Amir Levy/Getty Images)
Taiwan

The growing threat that communist China poses to Taiwan calls for a rethinking of the United States’ role in the Indo-Pacific region and for a show of diplomatic and military support for Taiwan to prevent China’s rulers from growing increasingly emboldened by the recent strategic failures of Western powers.

That’s according to former U.S. Secretary of State Mike Pompeo, who spoke at a Heritage Foundation event on March 16.

As the world focuses its attention on the Ukraine crisis, it’s crucial for the United States and its allies not to fall prey to short-sightedness and ignore the growing danger to self-governed Taiwan, Pompeo stressed.

“We need to make sure that we continue to focus on things that present the next risk, the next great challenge to human dignity, our civilization, and our way of life here at home,” he said.

After visiting Taiwan just over a week ago, Pompeo said it became clear to him that ensuring that Taiwan can defend itself from external threats requires the world to recognize the island’s identity as a sovereign nation.

Only a small handful of countries diplomatically recognize Taiwan as a country, while most countries, including the United States, maintain unofficial ties with the island. The Chinese Communist Party considers the self-ruled island as part of its territory, to be seized by force if necessary.

“It is not part of China. If it became part of China, this would not be reunification, this would be an aggressive action to destroy the sovereignty of an independent country, and for an awfully long time. But the West has moved away from this [stance] under coercive threats from the Chinese Communist Party,” Pompeo said.

“So no leaders in the West have been prepared to state the simple fact that this is an independent sovereign nation. We need to protect Taiwan’s sovereignty. It is time that the U.S. do so.”

Pompeo spoke on the same day that reports emerged that Taiwan’s minister of foreign affairs had refused to comment on the veracity of a purported document, allegedly leaked by a member of Russia’s intelligence service, claiming that Chinese leader Xi Jinping plans to invade Taiwan before the end of the year.

In Pompeo’s analysis, Xi has definitely grown emboldened over the chaotic U.S. pullout from Afghanistan, which many view as one of the worst foreign policy fiascos of recent years. The Chinese leader, he said, has found further encouragement in Western dithering over how to meet the gathering threat to Ukraine in the months leading up to the Feb. 24 invasion.

“We in the West united only after there had been enormous suffering and devastation in Ukraine,” Pompeo said.

The lesson for the Indo-Pacific region that Xi draws from these recent failures is clear, in Pompeo’s view.

“Xi must surely wonder if he won’t get one free pass, one free bite at the apple, before the West begins to protect sovereign nations in the region. We cannot let that be the case,” he said.

Further adding to the appeal of Taiwan as a target for invasion is the island’s prosperity, Pompeo argued, describing Taiwan as one of the few countries in the world that managed, amid the upheaval of the pandemic, to achieve sustained economic growth for five years and counting.

“We need to make sure that the Taiwanese people, who will be prepared to fight and defend their nation, have the tools and resources they need,” Pompeo said.

The former official further suggested that the scope of Xi’s territorial ambitions in the region is hardly limited to Taiwan. He recalled having met with North Korean ruler Kim Jong Un during his time as secretary of state. In the course of one of these meetings, Pompeo asked Kim what the Korean Peninsula might look like in the absence of any U.S. forces in South Korea.

To Pompeo’s surprise, Kim said that this scenario didn’t really interest him. The North Korean leader was aware that the U.S. presence protected him as much as the leaders of free nations in the region, he said.

Kim views America’s presence on the peninsula as a bulwark against the real threat, which comes from Xi Jinping,” Pompeo said.

Xi continually seeks “a little more territory, a little more real estate, and a little less freedom on the Chinese border,” he said.