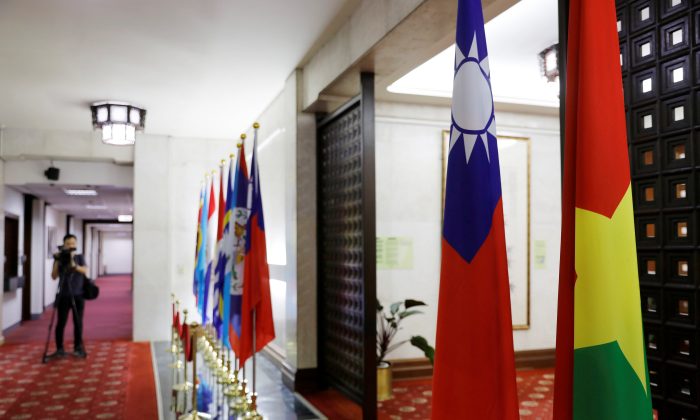 Flags of Taiwan and Burkina Faso (R) are seen inside Taiwan's Ministry of Foreign Affairs in Taipei, Taiwan on May 24, 2018. (Tyrone Siu/Reuters)
Africa

OUAGADOUGOU/TAIPEI—Taiwan lost its second diplomatic ally in less than a month when Burkina Faso said on May 24 that it had cut ties with the self-ruled island, following intense pressure from the Chinese regime.

The Chinese Communist Party considers Taiwan a part of its territory and insists on a “one China policy” that precludes any international space for Taiwan. Recently, as it seeks more investments in the African continent, China has pressured African nations to recognize only one China.

Taiwan now has only one diplomatic ally left in Africa—the tiny kingdom of Swaziland—and formal relations with just 18 countries worldwide, many of them poor nations in Central America and the Pacific like Belize and Nauru.

The Burkina foreign ministry’s statement made no direct mention of China, but said “the evolution of the world and the socio-economic challenges of our country and region push us to reconsider our position.”

“China toys with dollar diplomacy and promises huge sums of money to entice many countries to build relations,” Tsai said.

“I want to emphasize again that China’s pressure will only lead to Taiwan’s ties with its partners in the international community getting closer. We will not cower at all.”

Taiwan has accused China of luring its friends away with offers of generous aid packages.

Taiwan Foreign Minister Joseph Wu, who tendered his resignation, said: “China grabbing our allies and giving us pressure in the diplomatic space will not shrink the distance across the [Taiwan] strait and will not let cross-strait relations walk on a peaceful, friendly path.”

China’s hostility to Taiwan has grown since Tsai was elected president in 2016, who is from the pro-independence Democratic Progressive Party. She says she wants to maintain the status quo.

China is Africa’s largest trade partner, with massive investments in mining, construction and banking, though it has been less active to date in Burkina.

China is hosting a summit of African leaders in September in Beijing, where it will likely offer new pledges of aid and preferential loans.

In March, China said it was in the best interests of Taiwan’s allies to recognize an “irresistible trend” and ditch Taipei in favor of “one China.”

Burkina is the fifth country to cut ties with Taiwan since Tsai came to office, following the Dominican Republic, Gambia, São Tomé and Principe, and Panama.

The Vatican is possibly next, as the Holy See and China edge closer to an accord on the appointment of bishops there.

Taiwan says the Republic of China, its official name, is a sovereign country with the right to develop relations with other countries.

Some countries have switched back and forth between Beijing and Taipei several times.

This is the second time Burkina has cut ties with Taiwan. It last did so in 1973, before resuming relations with Taipei in 1994.