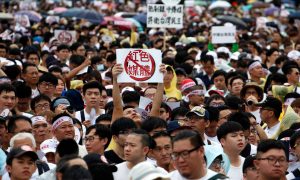 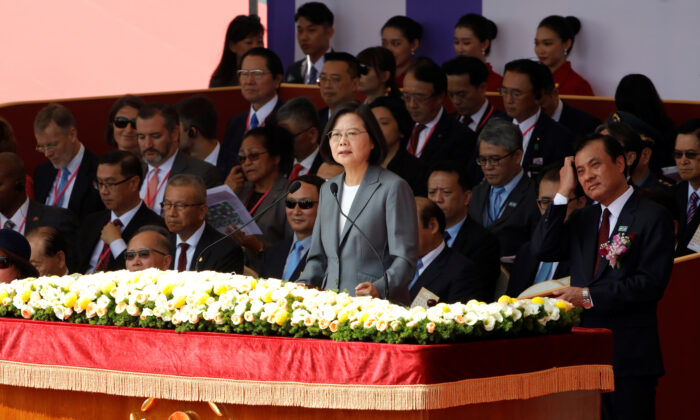 TAIPEI—Taiwan’s president rejected on Oct. 10 a “one country, two systems” formula that Beijing has suggested could be used to unify the island and the mainland, saying such an arrangement had set Hong Kong “on the edge of disorder.”

President Tsai Ing-wen also vowed in a National Day speech to defend Taiwan’s sovereignty, saying her government would safeguard freedom and democracy as Beijing ramps up pressure on the self-ruled island it considers a wayward province.

Taiwan’s National Day, marking the anniversary of the start of a 1911 uprising that led to the end of dynastic rule in China and the founding of a republic, was celebrated in Taipei with singing, dancing and parades.

Tsai, who is seeking re-election in January amid criticism of her policy towards China, referred to the arrangement for the return of the former British colony of Hong Kong to Chinese rule in 1997 as a failure.

Hong Kong has been hit by months of pro-democracy protests triggered by widespread resentment of what many city residents see as relentless efforts by Beijing to exert control of their city despite the promises of autonomy.

China has proposed that Taiwan be brought under Chinese rule under a similar arrangement, but Tsai said Beijing’s policies towards the island were a danger to regional stability.

“China is still threatening to impose its ‘one country, two systems’ model for Taiwan. Their diplomatic offensives and military coercion pose a serious challenge to regional stability and peace,” Tsai said.

“When freedom and democracy are challenged, and when the Republic of China’s existence and development are threatened, we must stand up and defend ourselves,” Tsai said, referring to Taiwan by its official name.

“The overwhelming consensus among Taiwan’s 23 million people is our rejection of ‘one country, two systems,’ regardless of party affiliation or political position.”

Cold War hostility between the island and the mainland had eased over the past decade or so as both sides focused more on expanding business ties, but relations have cooled considerably since Tsai took office in 2016.

The Chinese regime suspects Tsai and her independence-leaning Democratic Progressive Party of pushing for the island’s formal independence, and this year threatened it with war if there was any such move.

Tsai denies seeking independence and reiterated that she would not unilaterally change the status quo with China.

Despite her assurances, Beijing has stepped up pressure on the island to seek “reunification” and backed up its warnings by flying regular bomber patrols around it.

Beijing also says Taiwan does not have the right to state-to-state relations and is keen to isolate it diplomatically.

But Tsai said Taiwan was undaunted.

“The determination of the Taiwanese people to embrace the world has never wavered,” she said, adding that Taiwan must work with “like-minded countries” to ensure peace and stability across the Taiwan Strait.

Tsai said under her watch Taiwan has boosted its combat capabilities with the purchase of advanced weapons and development of home-made aircraft.

Taiwan unveiled its largest defense spending increase in more than a decade in August, aiming to purchase more advanced weapons from overseas.

The island has long been a flashpoint in the U.S.-China relationship.

In July, the United States approved the sale of an $2.2 billion worth of weapons to Taiwan, angering Beijing.

The United States has no formal ties with Taiwan but is bound by law to help provide it with the means to defend itself.