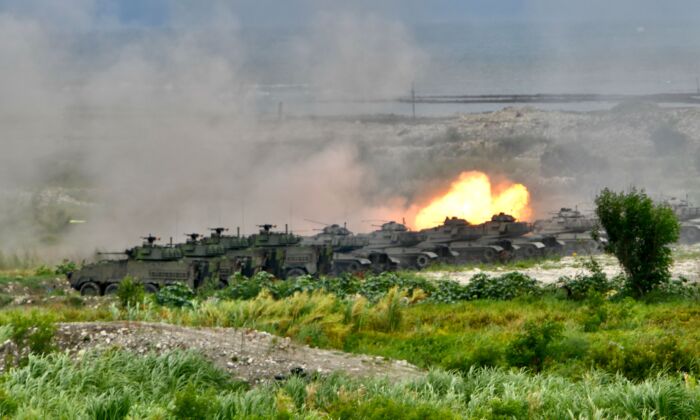 Taiwan Is Prepared for Any Surprise Attacks by China: Defense Analysts

Taiwanese defense analysts have told The Epoch Times, following the release of a Defence Ministry report on China’s potential strategy to turn a military drill in the Taiwan Strait into a surprise attack, that the Chinese Communist Party (CCP) doesn’t have the capacity to unify Taiwan by force before 2025.

However, they warned that Beijing might still try to launch a war, and said that Taiwan and its people should be prepared for the CCP’s different tactics.

Lee Cheng-hsiu, a senior assistant research fellow at Taiwan’s National Policy Foundation, told the Chinese language edition of The Epoch Times on Dec. 13 that there are multiple situations in which Beijing may decide to wage war on Taiwan.

“Once Taiwan announces it’s an independent country, the Chinese regime will use force against Taiwan at all cost.”

Another analyst Chie Chung, secretary-general and researcher at the Association of Strategic Foresight, said that with “the Chinese economy is shrinking because of the pandemic … once there’s social turmoil (perhaps the Chinese people standing up against the regime), the regime will launch the Taiwan War to transfer domestic blame for a poor economy on Taiwan and the cost of war.”

He added, “Another scenario that I’m concerned about is that both sides might launch a war if there’s a misfire.”

In recent years, the Chinese military has been almost daily sending warplanes into Taiwan’s “air defence identification zone” (ADIZ) and performing military exercises close to Taiwan in a campaign of intimidation and wearing down its enemies.

However, Su Tzu-yun, a senior analyst at the Taiwan-based Institute for National Defense and Security Research, told The Epoch Times, “[The Taiwanese government] used to talk about controlling the air, controlling the sea, and its anti-landing [capabilities]. Now, the new report has launched a new mode of combat—counter invasion—which is shooting long-range missiles to target China’s bases that fired on us.”

“This is the most striking part of the report,” he said of his confidence in Taiwan’s current defense capabilities.

All three analysts said they believe there may be a silver lining to any act of war by Beijing, as the Chinese regime would lose any chance to control Taiwan once it fails in its attack. Then, Taiwan would have a golden path to being recognized as an independent country on the international stage.

The Chinese regime claims the island as its own, despite Taiwan being a de facto independent country, with its own military, democratically-elected government, and constitution.

China faces a lack of transport capacity to transfer enough troops and supplies, extremely high risk landing operations if it is to occupy and use Taiwan’s port facilities and airport, as well the challenge of defense of its borders from foreign forces joining to help Taiwan.

According to CNA, the Defence Ministry predicts that the Chinese military prefers a surprise attack—likely a military drill. When the time is due, CCP forces will launch ballistic missiles and cruise missiles to attack Taiwan’s air defense bases, radar stations, and command posts. Meanwhile, the Chinese military’s Strategic Support Force will implement an electromagnetic attack in an attempt to destroy or paralyze Taiwan’s main combat force and key facilities.

For an island as large as Taiwan, with its population of 2.3 million and 35,873 kilometres square (13,850 sq mi) territory, the analysts said that the only way to occupy the island is through the landing of troops. An air and missile campaign by the Chinese military, as it is currently believed to be armed, won’t be enough to win the war for the CCP and can only support a war effort, they explained.

“The current estimation is that the Chinese military will have the capability to land 28,000 soldiers to Taiwan [in a relatively short time] once launching a war, [say] in 2025, based on calculations by both the Taiwan Defence Ministry and the U.S. Department of Defense. If the CCP wants to unify Taiwan by force, 28,000 troops is not enough,” Chie said. “If CCP wants to use air strikes to paralyze Taiwanese army, it won’t have this capability in 2025.”

Chie said that the Taiwanese army is prepared for a CCP invasion, and that it would give the Chinese military a hard time landing more troops once activated. It could also easily cut off supplies to Chinese troops from across the Taiwan Strait.

The CCP also doesn’t dare to allocate all its forces to the Taiwan Strait, Chie said, citing Beijing’s need to keep a military presense in the territories it is disputing with other countries, such as India, Vietnam, and Cambodia, and across the South China Sea.

Lee also noted that the report “mentioned that the United States and Japan are closely monitoring the Taiwan strait, and will stop the CCP once it launches the war against Taiwan, which will change the current situation in the region.”

The Taiwanese army will also have chances to defend their homeland during three stages needed for China to make a landing, Su said. “One is when the enemy is gathering together [on China’s seashore], the second is sailing, and the third is landing.”

“Long-range missiles can interfere with the enemy’s rhythm when it’s gathering, anti-ship missiles can target the warships, and accurate mid-range and short-range firepower can intercept the enemy once they land,” he added.

Meanwhile, Lee warned the Taipei government of the scenario where the Chinese military quickly seizes control of one of Taiwan’s smaller islands in the Taiwan Strait, such as the Penghu archipelago, or the Kinmen or Matsu Islands.

“Once the Chinese military occupies a small island in a short time, the Taiwanese people will be shocked, which might force the Taipei administrations to sit down with the Chinese regime for a reunification negotiation,” he said.