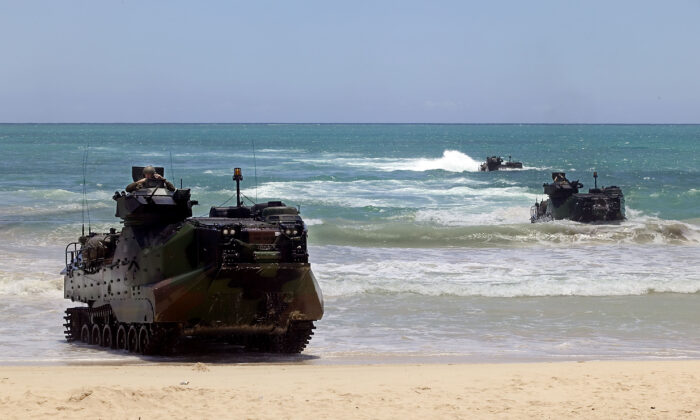 U.S. military Amphibious Assault Vehicles (AAV) from the USS Rushmore roll up on the beach during a Rim of the Pacific (RIMPAC) military exercise at Bellows Beach on Bellows Air Force Base, east of Honolulu on July 20, 2004. (Marco Garcia/Getty Images)
Viewpoints

Taiwan Gets Invited to RIMPAC? Best to Consider the Fine Print

Every two years in Hawaii, the U.S. Navy hosts RIMPAC, which is billed as the world’s largest maritime exercise. RIMPAC usually includes upward of 20 navies, mostly from the Indo-Pacific region, but often a few outsiders. In 2018, Germany and Israel participated in the exercise. The 2020 exercise was scaled back.

China’s People’s Liberation Army Navy (PLAN) was invited and attended in 2014 and 2016. But its invitation was “withdrawn” in 2018 because of Beijing’s “destabilizing behavior” in the South China Sea.

Taiwan has never been invited—and this year appears to be the first time the language has survived the final NDAA draft calling for Taiwan to be included in RIMPAC.

The Taiwan military’s attendance at RIMPAC would be a big deal not only as a sign of U.S. (and other nations’) support for Taiwan, but also as a move to break the 40-plus years of isolation that have stunted Taiwan’s military capabilities.

A ‘Sense of Congress’

But before assuming Taiwan will be there, it’s best to read the NDAA’s fine print.

You see, the language is clear enough:

“It is the sense of Congress that … the United States should continue to support the development of capable, ready, and modern defense forces necessary for Taiwan to maintain a sufficient self-defense capability, including by … conducting practical training and military exercises with Taiwan, including, as appropriate, inviting Taiwan to participate in the Rim of the Pacific exercise conducted in 2022.”

Clear language indeed, but here’s the problem: It is the “sense of Congress” that Taiwan should be invited. That’s different than Congress ordering that Taiwan be invited—and threatening consequences for ignoring Capitol Hill.

A “sense of Congress” resolution doesn’t require the Department of Defense (DOD), State Department, or even the White House to actually do anything.

This writer once heard a recently retired U.S. State Department official point this out—almost derisively—to an audience in Taipei, as if anyone was naive enough to think otherwise. He was at least polite enough not to use another longtime observer’s description of “sense of Congress” resolutions as akin to the emissions put out by a field of cows.

The “sense of Congress” in this year’s NDAA also includes other support for Taiwan: ensuring Taiwan has adequate weaponry and asymmetric capabilities to defend itself, and most importantly that the U.S. military conduct joint training with Taiwan’s armed forces.

But previous NDAAs included similar language. For example, the 2018 NDAA—during the Trump administration—called for inviting Taiwan’s military to participate in military exercises and it mentioned the U.S. Air Force’s Red Flag air-to-air combat exercise. It also called for conducting bilateral naval exercises with the Taiwan Navy.

None of that happened. It was just the “sense of Congress,” after all.

Not nearly enough has been done, especially on the “joint training” and “invite to exercises” requirements that are politically, psychologically, and operationally indispensable if Taiwan (and the United States) are to have a chance against China’s People’s Liberation Army.

On joint training, it’s been next to nothing other than two very small platoon-sized training events between Taiwan Marines and U.S. Marines in Hawaii (2017) and Guam (2021).

Can State and Defense Ignore Congress?

So can Pentagon and State Department officials and administration staffers just ignore Congress?

While Congress—on both sides of the aisle—is talking a good game over Taiwan, and has for a few years now, it knows the difference between a “sense of Congress” resolution and something that gets the bureaucracy’s attention.

Thus, it gets the (lack of) attention one expects.

During the Obama administration, the director for Asia affairs on the National Security Council wasn’t exactly a ball of fire when it came to Taiwan. Indeed, after leaving his post, he gave a speech to the American Chamber of Commerce in Hong Kong. His sage business advice to U.S. businessmen: “Do what aligns with Xi Jinping’s objectives.”

Even during the Trump administration—which was better about China than all its predecessors put together—Taiwan’s invitation to RIMPAC never came through. Nor could it break the Taiwan military’s isolation and do the necessary bilateral training. It squandered an excellent opportunity in this regard—apparently out of spite that Taiwan wasn’t following the administration’s orders in configuring its defense.

Such is the power of mid-level officials.

When it comes to Taiwan, NDAA 2022 only actually requires four things:

Assessments, reports, and studies are the Pentagon’s bread and butter—as is avoiding doing things it doesn’t want to do.

The Real Meaning of Taiwan at RIMPAC

So back to RIMPAC. What are some of the excuses that will be trotted out to lose the invite in the mail?

Won’t China be angry if Taiwan attends? Yes. But China is always angry. Anyway, if one is truly concerned about the threat posed by an aggressive and expansionist China, doing something Beijing objects to might be an indication that one is doing something that needs to be done.

And might inviting Taiwan lead other nations to drop out of RIMPAC out of fear of China’s wrath?

Maybe. But it’s best to get countries on record—and now. If they’re unwilling to stand up on this relatively easy matter, they certainly won’t find a backbone when Chinese communist pressure on Taiwan (and them) really gets rough.

And that goes for the United States, too.

These days, China is out for blood. It wants Taiwan—but it won’t stop with Taiwan.

Inviting Taiwan to RIMPAC—or not—will tell just how “rock solid” Team Biden’s support for Taiwan is. To give an idea of where we are now, Taiwan officials currently based in Hawaii aren’t even allowed to watch RIMPAC informally.

One might indeed argue that Biden “owns” the Taiwan issue now that he signed the NDAA. But every president has “owned” Taiwan. They’ve just, by and large, preferred to avoid the issue beyond what was unavoidable and what China would allow. Continue down that road and at some point, RIMPAC itself might become too “inconvenient.”

Taiwan—a democratic friend and partner—deserves to be at RIMPAC. Otherwise, Washington’s professions of commitment bring to mind that field of cows.