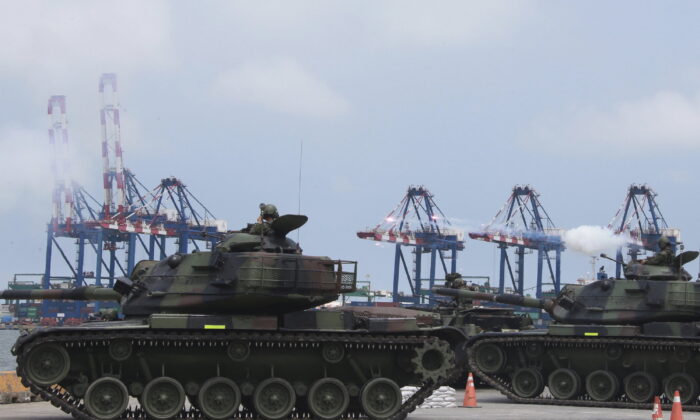 The drone returned to China following the shots, a spokesperson for Taiwan’s military said.

The incident marks the first time that warning shots have been fired amid a period of heightened tension between China and Taiwan, according to Reuters.

The Chinese Communist Party (CCP), which rules China as a single-party state, claims that Taiwan is a rogue province of China. Its leadership has vowed to unite the island with the mainland at any cost and has repeatedly stated that it will not renounce the use of force to do so.

Taiwan has never been controlled by the CCP, however, and has been self-governing since 1949. Moreover, its thriving market economy and democratic government make it a key trading partner to numerous Western nations, including the United States, despite the fact that the two do not share formal diplomatic ties.

China has conducted unprecedented military exercises throughout August, some of which have involved firing missiles over Taiwan and temporarily blockading the island from trade.

The exercises began shortly after U.S. House of Representatives Speaker Nancy Pelosi visited Taiwan earlier this month. CCP authorities claim that Pelosi’s visit violated Chinese sovereignty, though experts note that the scale of the joint exercises proves they were planned for many months before Pelosi’s visit. The United States claims that China is fabricating a crisis to justify an aggressive takeover of the island.

Taiwan has complained of Chinese drones repeatedly flying very close to small groups of islands it controls as part of the CCP’s ongoing military drills, and numerous international forums have condemned the CCP’s destabilizing actions.

‘Scare Away Some Sparrows’

A spokesperson for the command where the incident occurred said that flares were previously used to ward drones off before the live fire occurred on Tuesday.

There was no immediate response from China.

CCP forces have attempted to normalize incursions into the air and waters around Taiwan since Pelosi’s visit. Footage of Chinese drone missions has since circulated widely on Chinese social media, with some videos showing Taiwanese soldiers at their posts or throwing rocks at a drone.

“I want to tell everyone that the more the enemy provokes, the more calm we must be,” Tsai told naval officers.

“We will not provoke disputes, and we will exercise self-restraint, but it does not mean that we will not counter.”

Tsai said that she ordered the ministry of defense to take the “necessary and strong countermeasures” to defend Taiwan’s airspace but did not elaborate further.

Taiwanese military officers said that some of Taiwan’s warships and fighter jets, which have been conducting counter drills, have been armed with live ammunition since China began its exercises this month. The forces have not been compelled to open fire yet, however.

One naval officer said that the Taiwanese and Chinese forces regularly traded tense radio warnings in which the Chinese attempted to provoke the Taiwanese into opening fire.

Taiwan Defense Minister Chiu Kuo-cheng said he could not give details on how the military would counter the incursions. He did say, however, that Taiwan’s military would react on the principle of “self-defense.”

CCP authorities previously said that China’s drone incursions near Taiwanese islands were nothing “to make a fuss about.”

Perhaps responding to that message, Chiu told reporters on Tuesday, “Don’t make a fuss then when I set off some firecrackers to scare away some sparrows.”