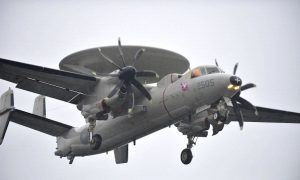 The People’s Republic of China has continually ramped up the pressure on Taiwan, threatening it with ever more sophisticated military hardware and looking to expand into contested waters off Taiwan. Taiwan has recently pushed back, by expanding a military base in the Spratly Islands.

Taiping island, also called Itu Aba, is approximately 994 miles south of Taiwan. It is the largest of the Spratly Islands, and is also contested by the People’s Republic of China (PRC), the Philippines, and Vietnam.

The area is on a major shipping line for the PRC, and most of its oil supplies pass through the Spratly Islands, according to Global Security. It states Taiwan “could use the island as an attack submarine and aircraft base against Chinese merchant ships in the event of war.”

Taiping Island is one of few in the region where an airstrip could be built, and it is the only one of the Spratly Islands with a source of freshwater.

The Spratly Islands are situated between the southern parts of Vietnam and the Philippines, and north of Malaysia in the South China Sea. The area includes more than 750 reefs, islets, atolls, cays, and islands.

Several of the islands and reefs are occupied by surrounding countries. Taiwan occupies 1 island and 1 reef; the People’s Republic of China occupies 9 reefs; the Philippines occupies 7 islands and 3 reefs; Vietnam occupies 6 islands, 16 reefs, and 6 banks; and Malaysia occupies 1 artificial island, 5 reefs, and 1 shoal.

Japan officially renounced its rights, title, and claims to the Spratly islands through the San Francisco Peace Treaty in 1951.

The territorial dispute in the Spratly Islands is just one of many in the region, including both in the South China Sea and the East China Sea.

Surrounding countries say they want to explore for resources in the region, with rumored deposits of oil and minerals. Yet, the strategic value of the area is what makes it important—particularly with the People’s Republic of China (PRC) trying to expand the areas it controls.

Taiwan has stated that the only forces present on the island are from its Coast Guard and has not garrisoned the island with troops. An editorial published on the Taiwan government website states, “Our government’s initial response has been appropriately cautious. It has denied any military buildup, out of fear that other countries would take countermeasures.”

At the same time, the Taiwan government notes how the Taiping Island base gives it an advantage in claims for the contested area.

“Compared to other countries’ small islets and and reefs, it has far greater strategic value. In future negotiations on the South China Sea, Taipei cannot be ignored,” states the editorial.

Taiwan will begin expanding its runway and dock on Taiping Island in 2014, and expects construction to finish in two years.

Due to the shallow waters surrounding the island, its dock is only accessible by small boats. They plan to extend the dock to 1,050 feet and dredge the harbor by 45 feet to allow access for larger ships, according to Taiwan’s state-run Central News Agency.

Other work will be done on the airstrip, which currently stretches nearly the full length of the 0.8-mile island. Taiwan plans to add landing lights and a refueling facility, and improve rainwater drainage, according to the Central News Agency.