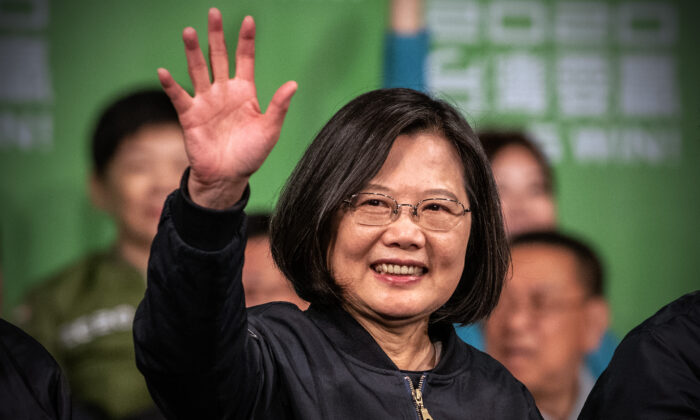 There was “no doubt” that the election results signified a “repudiation of China,” and “a repudiation of the idea of unification,” June Teufel Dreyer, a political science professor at the University of Miami and a senior fellow of the Foreign Policy Research Institute, told The Epoch Times.

Tsai won reelection in the three-way race on Jan. 11, scoring a record 8.17 million votes—or about 57 percent of the popular—the highest tally since the self-ruled island began its first direct presidential election in 1996. Her Democratic Progressive Party (DPP) also dominated with 61 of the 113 legislative seats.

The election result was a dramatic turnaround for Tsai, who last year had struggled in her approval ratings. Tsai’s popularity saw a sharp rise after she took a hard stance on Beijing while supporting pro-democracy protesters in Hong Kong.

Although the democratic island maintains de-facto independence from the mainland with its own policy, economic system, and military, the Chinese regime considers Taiwan a part of its territory. It has sought to merge with the island under the “one country, two systems” formula, the framework that currently governs Hong Kong and Macau.

“This election only confirmed in spades that the idea [‘one country, two systems’] has no market in Taiwan,” Richard Bush, director of the Center for East Asia Policy Studies at the Brookings Institution, told The Epoch Times’ affiliate NTD following an election-watching event in Washington.

Derek Mitchell, president of the National Democratic Institute and a former U.S. ambassador to Burma, called the election results “a referendum on China.”

It also exemplified the idea of the “silent majority,” whose views may only be realized through democratic votes, according to Mitchell.

“When people say: in China the people support their government, they all support the … CCP [Chinese Communist Party]. The answer is—how do you know?” he said at the same event.

“We see what the ‘silent majority’ says when they’re allowed to speak,” he continued.

By reference to the recent Hong Kong district elections, where pro-democracy candidates also won a sweeping victory, Mitchell noted that there’s a pattern of increasing engagement from the younger generation.

“That is the hope of democracy going forward, not the older folks who … have the same old mindsets in the same old ways, but new energy for democracy,” he said.

The Chinese regime is probably not surprised about the election outcome that they have also been following closely, but “they may not have expected there would be … such a wide margin,” Bonnie Glaser, director of the China Power Project at the Washington-based Center for Strategic and International Studies, said at the event.

Despite the resounding victory, experts warned that Taiwan should not become complacent.

“This is not done. Nothing is over. Taiwan still has to … keep its edge and recognize that the authoritarian powers and those who don’t like democracy are playing a long game,” Mitchell said.

Glaser said in the years ahead one may see a “ratcheting up of diplomatic, military and economic pressure [by Beijing] on Taiwan.”

“There’s an enormous amount that Taiwan needs to do to strengthen deterrence,” she added.

In terms of the island’s economy, Bush said that he did not expect the mainland to pose serious threats to Taiwan’s companies, as Beijing sees local business leaders as “a political resource” and a “constituency within Taiwan for promoting their own goals.”

Instead, “Taiwan’s economy depends more on what’s happening in the world economy, but also what happens in U.S. policy on a variety of issues,” he said.

“[Chinese leader] Xi Jinping has a lot on his plate,” she added.