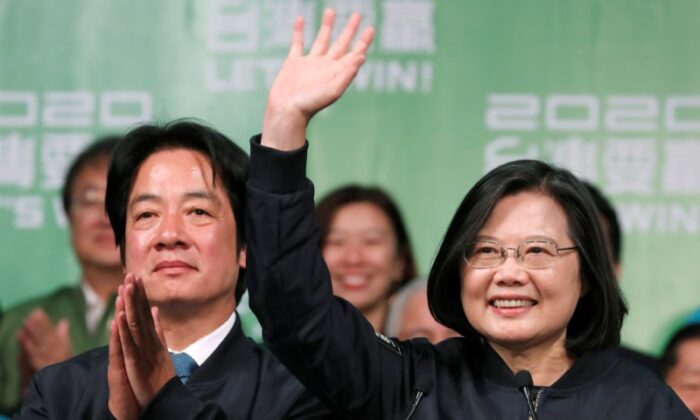 Taiwan President Tsai Ing-wen won a second term by a landslide in the island’s presidential election on Jan. 11, in a victory seen as a rejection of Chinese regime encroachment.

Tsai of the Democratic Progressive Party (DPP) won by a margin of around 20 percent—or more than 2.6 million votes—against her main opponent, Han Kuo-yu of the Kuomintang (KMT) party.

The election is widely viewed as a referendum on whether Taiwan should pursue closer ties with the Chinese regime, which claims Taiwan as part of its territory, despite it being a self-ruled island with its own democratically-elected government, military, and currency.

The DPP traditionally advocates for formal independence from mainland China, though Tsai has said she wishes to maintain the status quo. Meanwhile, the KMT favors friendlier ties with the mainland.

The election also took place with the backdrop of ongoing pro-democracy protests in Hong Kong, marked by growing discontent at the regime’s perceived tightening grip on the city, which protesters say is in violation of Beijing’s pledge to uphold the city’s autonomy under a framework known as “one country, two systems.”

The Chinese regime has proposed that Taiwan could unite with the mainland under the same framework.

Loud cheers filled the rally site for Tsai as her supporters waved flags in celebration. Speaking to the press, she expressed appreciation to voters.

Tsai also said she wanted to remind Beijing that “peace, parity, democracy and dialogue” are “the only path to bring together … two peoples.”

“China must abandon threats of force against Taiwan,” she said, adding that “neither side of the Taiwan strait should deny the fact of the other’s existence.”

In the lead-up to the election, the Chinese regime twice sent its newest aircraft carrier to the Taiwan strait, a move denounced by Taipei as military intimidation. The regime has never ruled out using military force to take Taiwan.

“Democratic Taiwan and our democratically elected government will not concede to threats of intimidation,” she said. “The results of this election has made this answer crystal clear.”

China’s Taiwan Affairs Office, in a statement carried by state media, reaffirmed its commitment to this approach and its opposition to any form of independence.

Roughly 14.3 million locals cast their vote on Saturday, equating to a turnout rate of around 74 percent—approximately eight percent higher than the previous presidential election in 2016.

At a press conference in the southern Taiwanese city of Kaohsiung, Han, who became the mayor of the city in 2018, expressed “best wishes” for Tsai and said he “hoped to see a cooperative Taiwan” in the future.

Wu Den-yih, leader of the KMT, blamed himself for their party’s defeat and submitted a request for resignation. The Nationalist Party will decide by next week on whether or not to approve the request.

Voters also chose their representatives in parliament. The DPP is dominating with 61 out of 113 legislative seats, while the KMT and Taiwan People’s Party secured 38 and 5 seats respectively.

U.S. Secretary of State Mike Pompeo congratulated Tsai on her re-election, applauding “her commitment to maintaining cross-Strait stability in the face of unrelenting pressure.”

“Under her leadership, we hope Taiwan will continue to serve as a shining example for countries that strive for democracy, prosperity, and a better path for their people,” Pompeo said in a statement.

June Teufel Dreyer, a political science professor at the University of Miami and a senior fellow of the Foreign Policy Research Institute, told The Epoch Times that there is “no doubt” that the election results are a “repudiation of China,” and “a repudiation of the idea of unification.”

Tsai, who had struggled in polls in early 2019, saw a surge in voter support since June, when the Hong Kong protests began. Analysts believe Beijing’s harsh response to protesters impacted voter sentiments.

Taiwanese voter Brian Huang, a middle school math teacher, said watching the escalation unfold in the nearby Hong Kong pushed him and many others to reassess their own future.

“If we don’t stand up now, we might become the next Hong Kong,” he told The Epoch Times at a Taipei rally as the election results rolled in.

He said he wanted to give Tsai “another four years of opportunity,” noting the diplomatic challenges ahead.

In September 2019, two of Taiwan’s allies in the Pacific, Solomon Islands and Kiribati, severed diplomatic ties with the island, switching to Beijing.

Shortly after Tsai declared victory, China’s state-run Global Times issued an editorial warning Tsai’s party “not to be insolent.” It suggested that Tsai gained the votes by “demonizing the mainland” and taking advantage of the toughening U.S. policy toward China, and further claimed that the “overall strength of the mainland will become ever stronger and unstoppable.”

Although “pressure from China will only continue,” Tsai said Taiwan will maintain the status-quo to ensure peace in cross-strait relations under the principles of democratic values.

“Winning the election is only the first step,” Dreyer said. “Now it’s up to her to prove to the people of Taiwan that she has earned their confidence.”