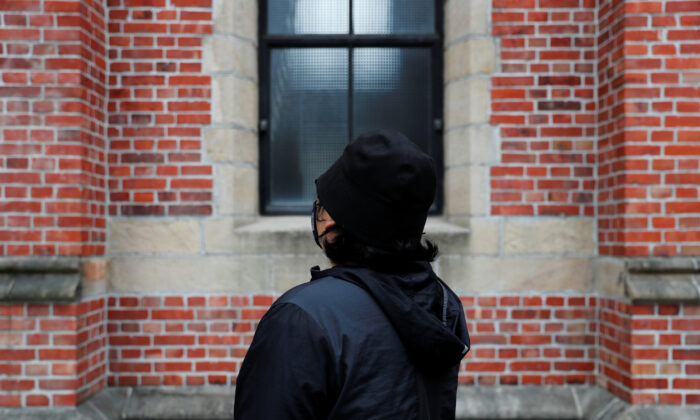 A protester in his early 30s, who asked only to be identified as Jero, poses for photo at a Presbyterian Church in Taipei, Taiwan on Dec. 23, 2019. (Tyrone Siu/Reuters)
Asia & Pacific

TAIPEI—A small but growing number of Hong Kong protesters who fled to Taiwan for safety over the past few months fear an opposition victory in the island’s election this week will put them in peril and force them to leave.

The mostly young men and women who came to Taiwan after taking part in increasingly violent protests in support of democracy in Hong Kong have no legal way to gain permanent asylum, but President Tsai Ing-wen’s broadly sympathetic government has allowed about 60 of them to temporarily extend their stay.

Some of those protesters fear that support will vanish if the Jan. 11 election is won by Han Kuo-yu, the presidential candidate for Taiwan’s Kuomintang opposition party, which favors close ties with China.

“If Han Kuo-yu is elected, I will buy a flight ticket and flee to another country right away,” a protester in his early 30s who asked only to be identified as Jero told Reuters.

Jero said he flew to Taiwan on a tourist visa days after he took part in the storming of Hong Kong’s Legislative Council on July 1 fearing he could be charged with rioting, which carries a maximum prison term of 10 years.

He now lives in a small studio in Taipei funded by a network of local activists supporting the protesters.

The issue of Hong Kong has played a large role in Taiwan’s election campaign. Tsai has vowed to defend the island’s sovereignty and has rejected China’s suggestion of a “one country, two systems” political formula, saying it has failed in Hong Kong.

Han, who says he wants to forge strong ties with Beijing and met with Hong Kong’s embattled leader Carrie Lam and senior Chinese officials last year, has accused Tsai of using the Hong Kong protests to whip up fears of China for electoral gain.

Both Tsai and Han have voiced support for Hong Kong protesters. But the prospect of a Han presidency is more concerning to the protesters.

“Hong Kong people are fighting against the Chinese Communist Party, but how could we convince ourselves that the Kuomintang is also against the Communist Party?” said a protester called Roger, whose tourist visa has been extended twice since his arrival in Taiwan in July.

Jacob Lin, a Taipei-based lawyer who is part of a team that has been offering legal assistance to protesters seeking residency in Taiwan since mid-summer, said many protesters are worried about a change of political control.

“If the ruling party is replaced, the treatment for protesters may be quite different,” he said, referring to Tsai’s Democratic Progressive Party (DPP).

Responding to protesters’ concerns about a Han victory, Han spokeswoman Anne Wang urged Hong Kong protesters not to be used by the DPP for electoral gain.

Taiwan’s government has helped close to 60 protesters who are seeking shelter on the island for “political” reasons since the protests started about six months ago, a senior government official with direct knowledge of the matter told Reuters.

The official, who asked not to be named due to the sensitivity of the matter, said Taiwan has been offering “assistance on an individual basis” to protesters, discreetly allowing them to extend tourist visas multiple times or facilitating applications for student or work visas.

Taiwan’s government will not deport those who had made it there, the official said.

Taiwan’s Mainland Affairs Council said in a statement that it will “appropriately handle individual cases” in accordance with existing laws, without elaborating.

Tired of waiting around, some are taking direct action to help the protesters restart their lives in Taiwan.

Hong Kong-based rights lawyer Daniel Wong is leading an initiative to set up at least 10 companies from a laundry service to a restaurant in Taiwan to give protesters much-needed residency via work visas.

Wong said the plan, dubbed “project protective umbrella,” will be funded by a group of anonymous supporters in Taiwan and Hong Kong, many of whom are lawyers, doctors and other professionals.

“We are going to help our own kids,” he said. “Hong Kong people are not refugees.”

Huang Chun-sheng, a pastor at a Presbyterian Church in Taipei which has received more than 100 protesters said he will set up a foundation for Hongkongers in Taiwan to coordinate funding support for those needing shelters.

He said a few of those protesters had since returned to Hong Kong in the belief that they would likely not be charged there.

Shopping for daily necessities in Taipei, a protester in her 20s who identified herself as Tiffany sounded caution on the coming vote, and urged Taiwanese to vote for Tsai, who she says can protect the island’s freedoms.

“I hope to study and find a job in Taiwan,” she said. “I hope Taiwanese can cherish the votes in their hands.”

By Felice Wu and Yimou Lee