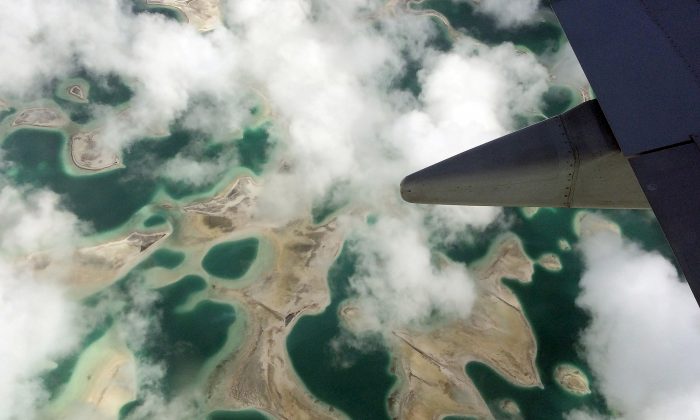 Lagoons can be seen from a plane as it flies above Kiritimati Island, part of the Pacific Island nation of Kiribati, April 5, 2016. (Lincoln Feast/Reuters)
Asia & Pacific

Kiribati Severs Ties With Taiwan Amid Pressure from Chinese Regime

China claims Taiwan, which also goes by the Republic of China, as its territory, and says the democratic island has no right to formal ties with any country.

The Kiribati president’s office and China’s foreign ministry did not immediately respond to requests for comment.

The move comes days after the Solomon Islands cut off ties with Taipei and deals a fresh blow to Taiwan President Tsai Ing-wen, who is seeking re-election in January.

Taiwan has lost seven allies to China since she took office in 2016 amid criticism of her handling of relations with China.

Since Tsai took office, China has increased pressure on Taiwan, including with regular Chinese bomber patrols around the island. China suspects Tsai of pushing for Taiwan’s formal independence, a red line for Beijing.

Taiwan Foreign Minister Joseph Wu told reporters in Taipei that Taiwan had terminated diplomatic ties with Kiribati and will immediately close down its embassy there.

“According to information obtained by Taiwan, the Chinese government has already promised to provide full funds for the procurement of several airplanes and commercial ferries, thus luring Kiribati into switching diplomatic relations,” Wu said.

“It is blatantly obvious that the Chinese government, by creating these diplomatic incidents, seeks to manipulate public opinion in Taiwan, influence Taiwan’s upcoming presidential and legislative elections, and undermine its democratic processes.”

Kiribati is the seventh country to drop Taiwan as a diplomatic ally since 2016, following Burkina Faso, the Dominican Republic, Sao Tome and Principe, Panama, El Salvador and the Solomon Islands.

Taiwan now has formal relations with only 15 countries worldwide.