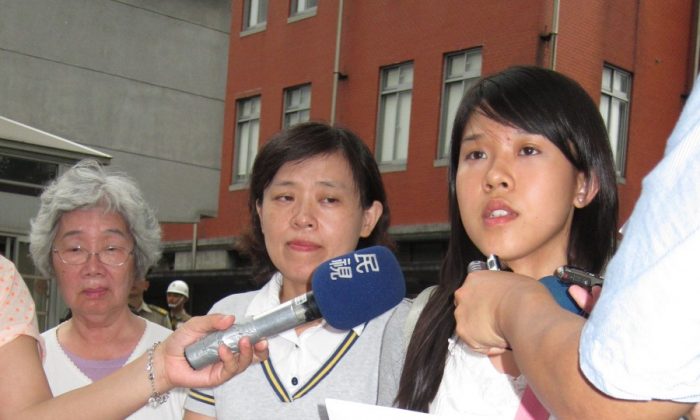 Chung’s mother, wife, and daughter appeal at the Taiwanese Office of the President on June 27. (Chung Yuan/Epoch Times))
China

Taiwan Citizen Accused of Conspiring to Tell Truth in China

A Taiwanese engineer who took a quick three-day trip across the strait to southern China now faces the possibility of an extended prison term and torture. His alleged crime: wanting to break through the rigid censorship that controls China’s TV broadcasts.

Chung Ting-pang was snatched at the Ganzhou airport in Jiangxi Province on June 18 as he prepared to board his plane to fly home.

He is now being charged with attempting to interfere with China’s broadcast networks, according to the state mouthpiece Xinhua. This is a grave charge that has in the past met with severe torture of accused individuals and death in custody.

The Xinhua news release says that “his cooperation was required in a related investigation.” He was put under residential surveillance that night, Xinhua said.

State security officials then summoned Chung’s relatives in the mainland, who transmitted the news to his wife in Taiwan.

Xinhua claims that since 2003 Chung has been “collecting secret documents” and sending to mainland China equipment that can be used to “insert broadcasts,” as well as “inciting Chinese residents” to engage in the same activities.

Zhou Yongkang, the embattled domestic security czar, gave the order for Domestic Security agents to arrest Chung, according to a source who is familiar with the matter. Domestic Security is a department of the Public Security Bureau that specializes in tracking and persecuting dissidents.

Chung is an adherent of the spiritual practice Falun Gong, whose practitioners have several times in the past inserted programming (from the Chinese, “chabo”) concerning the persecution of Falun Gong into mainland China broadcasts.

Chung’s family in Taiwan has neither confirmed nor denied that Chung may have been involved in an attempt to broadcast material about Falun Gong on China’s television networks.

Erping Zhang, a spokesperson for the Falun Dafa Information Center, questioned the claim. “He was there on a three day trip. I don’t think he was on the trip doing that,” Zhang said in a telephone interview.

“Xinhua is the same mouthpiece that said no one died on Tiananmen Square, and that SARS didn’t exist. It’s a propaganda machine. Their credibility is zero.”

But nevertheless, Zhang doesn’t think there would have been anything wrong had Chung actually been attempting to insert Falun Gong broadcasts into television networks.

“China is a closed society. The constitution guarantees people’s right to freedom of information and expression, but the CCP violates the constitution by censoring information. We’re talking about a rogue regime where the Communist Party totally disregards the law and the constitution which they wrote themselves,” he said.

Under those circumstances, “anyone bringing information to a censored society is bringing light to darkness. It’s admirable.”

He added that “It’s not a legal issue, it’s a moral issue,” and that if Chung were attempting to show to fellow Chinese the facts of the persecution of Falun Gong, he was in the right to do so, Zhang said.

Typical contents of inserted broadcasts include the “False Fire” documentary, which reveals an incident that took place in January of 2001, where five people set themselves on fire in Tiananmen Square, to be a hoax.

While the Chinese public had seemed largely unmoved by the previous propaganda attacking Falun Gong, the self-immolation videos struck a chord, turning popular opinion against the practice for a time.

There were numerous inconsistencies in the story, however, and it is now widely understood outside China to have been set up in a gruesome attempt to discredit the practice.

The first time this was done through inserting video into a mainland TV broadcast was on March 5, 2002 in Changchun in northeastern China.

After the 50 minute broadcast, the city was put under martial law and Falun Gong practitioners suffered a reign of terror as officials sought to root out those responsible for the unauthorized broadcast.

Liu Chengjun had led the small team responsible for the broadcast.

When police found him they shot him twice in the leg before taking him into custody, according to a graphic account of his final hours of freedom on Minghui, a Falun Gong website run by volunteers.

After Liu was taken into custody he was tortured on a Tiger Bench for 52 days, according to Minghui. The tiger bench is a kind of metal torture rack, where the practitioner is tied upright with their feet splayed in front of them and the knees tied to the bench. Bricks are then placed under the feet, bending the knees upward and causing excruciating pain. Police may then use electric batons and cigarettes to torture the victims, who report passing out due to the agony.

Liu died from his injuries the day after Christmas in 2003.

The extreme violence with which people accused of inserting broadcasts are treated is an indication of the Party’s insecurity regarding its anti-Falun Gong propaganda, according to Charles Lee.

Lee is a Falun Gong practitioner and U.S. citizen who spent three years in prison for attempting to broadcast information about the persecution of Falun Gong in China.

Lee said in a telephone interview: “There is no media freedom in China and people are brainwashed from the beginning of their lives. When the regime started the persecution of Falun Gong in 1999, it was also by means of propaganda campaigns.

Lee continued: “After people know the truth, the CCP would no longer be able to persecute anyone. Truth is power, and that’s why the CCP is very much afraid of any activities to reveal the truth, including inserting broadcasts. They’re afraid of truth.”

In Chung’s case the charges could be a pretext—the real reason for his arrest could simply be that he practices Falun Gong.

In Taiwan, his wife and daughter are aware of the claims from Xinhua, but they just want their husband and father back. On the afternoon of June 27 Chung’s mother, wife, and daughter went to Taiwan’s Office of the President, submitting a full account of Chung’s arrest and asking President Ma Ying-jeou to bring Chung back. A representative said that Ma had heard the news and would respond quickly.