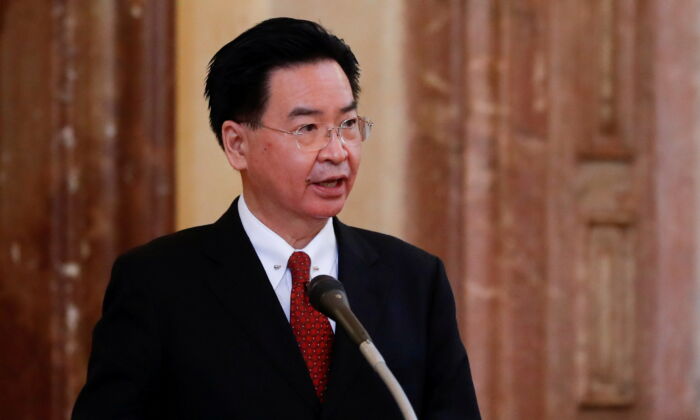 Taiwan Foreign Minister Joseph Wu speaks after receiving the Silver Commemorative Medal from the Senate of the Parliament of the Czech Republic, in Prague, Czech Republic, on Oct. 27, 2021. (David W Cerny/Reuters)
International Relations

Joseph Wu, the Taiwanese Minister of Foreign Affairs, visited Slovakia, the Czech Republic, and Belgium for about a week in late October.

During the trip, Wu received a Foreign VIP Laureates medal from the Czech senate, and invited a committee of the European Parliament, the Special Committee on Foreign Interference in all Democratic Processes in the European Union, including Disinformation, to visit Taiwan.

The European lawmakers made their first official visit to Taiwan on Nov. 3.

Taiwan’s Foreign Affairs Ministry published a statement on Oct. 29, which said that the Global Times smeared Wu’s visit without any fact nor evidence.

“A state-run media fell to the level of only lying and publishing fake news. This really can only be done in the autocratic and totalitarian communist China,” the statement said. “Only the propaganda media of the Communist Party, which doesn’t respect democracy nor rule of law, has this kind of mindset.”

The statement said that Wu’s European visit focused on the democracy and freedom that Taiwan shares with Europe, as well as promoting bilateral trade and industry co-development.

The Beijing authorities have criticized any state that has ties with Taiwan as “interfering in China’s domestic affairs.”

In past decades, the Beijing regime has tried to block the Taiwanese government from joining international organizations including the World Health Organization.

The Chinese regime also targeted the countries that have diplomatic relations with Taiwan. Seven countries changed recognition from Taipei to Beijing from 2016 to 2019.

At present, Taiwan has diplomatic relations with 15 countries globally including in the Pacific, Africa, and Latin America.